Next week, the trio will need to be even better and their teammates on defense will have to be at their best.

Thorne threw two of his four touchdown passes to Reed, and Walker ran for 143 yards and two scores to help No. 8

If Mel Tucker's team can upset No. 6 Ohio State on the road next Saturday and beat No. 23 Penn State at home the following week, it will be in the conference's championship game in Indianapolis with an opportunity to earn a spot in the College Football Playoff.

"We know who we're playing and we know where we going," Thorne said. "In order to get to Indy, you have to go through Columbus and we know that. 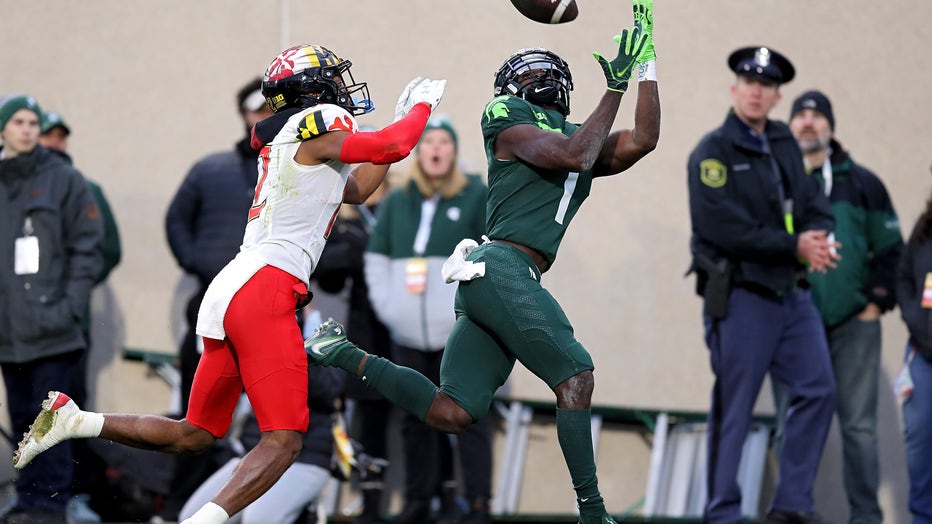 EAST LANSING, MICHIGAN - NOVEMBER 13: Jayden Reed #1 of the Michigan State Spartans catches a touchdown pass against Tarheeb Still #12 of the Maryland Terrapins in the first half at Spartan Stadium on November 13, 2021 in East Lansing, Michigan. (Pho

Michigan State and No. 9 Michigan are in a second-place tie behind the Buckeyes. Even though the Spartans beat the rival Wolverines two weeks ago, Jim Harbaugh's team was ranked one spot higher in the CFP rankings earlier this week.

"Are we happy about it? No," Thorne acknowledged. "But things will work themselves out. We have two big games left on our schedule."

The Terrapins (5-5, 2-5) have lost five of their last six games. To be bowl eligible, they have to stun the Wolverines next week at home or close the regular season with a win at Rutgers.

"I told the team I’m proud of the effort, but obviously disappointed with some of the attention to detail," coach Mike Locksley said.

Thorne was 22 of 31 for 287 yards with a 51-yard touchdown pass to Montorie Foster and a 29-yard pass to Jayden reed for a score in the first quarter. He had a 2-yard toss to Connor Heyward midway through the second quarter and his fourth touchdown pass, matching a career high, went to Reed in the third.

Walker ran for a 1-yard score to put the Spartans ahead 27-7 late in the first half. He aggravated an ankle injury at least once during the game, but the ailment wasn't enough to keep him out of the game.

"If I can play through pain, I’m going to play," said Walker, who started the week leading the nation in rushing and as a Heisman Trophy contender.

With a chance to get closer early in the third, Tagovailoa threw an interception to linebacker

Tagovailoa finished 29 of 48 for 350 yards with two touchdown passes to Chigoziem Okonkwo. He has a Big Ten-best six 300-yard passing games, breaking a Maryland single-season record set by Scott Milanovich in 1993.

Michigan State might move up a spot in the

Michigan State defensive tackle Maverick Hansen was ejected late in the third quarter after the officials determined he threw a punch.

Maryland: The Terrapins had a lot of success moving the ball, but they came away scoreless on drives that ended at the Michigan State 16, 23, 24 and 39 in the second half to spoil any chances of an upset victory. They also had the ball near midfield on three other possessions that ended without a point.

"We made plays from the 20 to the 20," Locksley said. "But it’s going to be very important that if you want to win against quality opponents like Michigan State when you get it in there, you’ve got to come away with touchdowns."

Michigan State: A team that started the season unranked and with low expectations outside the program has a chance to play for championships, but it won't be easy. Michigan State's porous defense, which was exposed in last week's loss at Purdue, will be hard pressed to slow down Ohio State's offense to keep high hopes alive by this time next week.