DETROIT - Victor Reyes hit a deep flyball to center field in the 10th inning, scoring automatic runner Ryan Kreidler from third base and giving the Detroit Tigers a 3-2 win over the Chicago White Sox on Friday night.

"This is a great win — there's no question about it," Tigers manager A.J. Hinch said. "Whether you love or hate the extra-inning rule, it creates a lot of action. That was a fun way to win a game."

The White Sox fell four games behind the Cleveland Guardians in the AL Central. 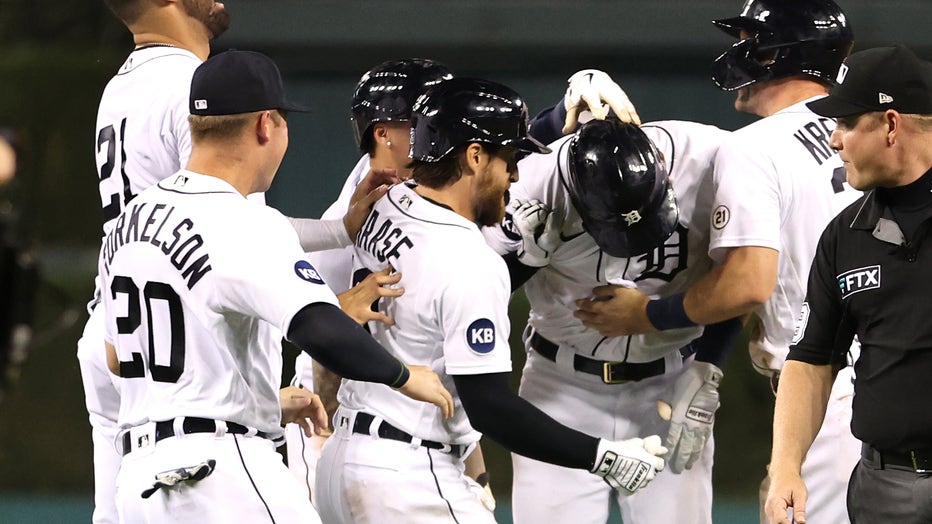 DETROIT, MICHIGAN - SEPTEMBER 16: Victor Reyes #22 of the Detroit Tigers celebrates with teammates after his walk off 10th inning single brought home the winning run to beat the Chicago White Sox 3-2 at Comerica Park on September 16, 2022 in Detroit,

"We can't be thinking about what Minnesota and Cleveland are doing unless we are playing them," interim manager Miguel Cairo said. "We can only focus on winning the game we are playing."

Tigers reliever Alex Lange (5-4) struck out the side in the 10th, and Willi Castro started the bottom half with a bunt. Liam Hendriks (3-4) fielded it, looked at Kreidler going to third, then bounced his throw to first, putting runners on the corners.

The error was the second of Hendriks' 12-year career.

"That was a pretty bad time to have one," he said. "If I make the right play there, Reyes is the third out and we're hitting again in the 11th."

Riley Greene struck out before Reyes hit his game-ending sacrifice fly on a 1-2 fastball. Adam Engel made a running catch but had no chance to throw out Kreidler.

"I had gotten him to swing at two high fastballs and I thought I could get another one past him," Hendriks said. "I missed low and he put a good swing on it."

Chicago trailed 2-0 after seven innings but tied the game in the eighth, spoiling a scoreless seven-inning, three-hit outing by Tigers starter Matt Manning.

"This was great," Manning said. "I think (the White Sox) thought they were going to come in and get some easy wins. We didn't like that, so we were going to fight back."

Josh Harrison doubled off reliever Joe Jimenez with one out in the eighth, and Elvis Andrus reached on an infield single off Kreidler’s glove at third.

Yoan Moncada popped out, but Jose Abreu doubled past Kreidler’s dive to tie the game. Abreu has a career average of .349 with 118 RBIs in 142 games against the Tigers.

"I liked the way we battled back," Cairo said. "We got Jose a chance and he got us that double to put us right back into the game."

The Tigers had a scoring chance in the bottom of the inning with Javier Báez on third and one out.

However, Joe Kelly struck out Spencer Torkelson, and when the third strike bounced away from Yasmani Grandal, Kelly picked it up and threw to Grandal in time to retire Báez at the plate.

"That's a tough read for Javy, and I hate to criticize aggressiveness — he's trying to make a play," Hinch said. "But (Torkelson) has to run to first — we messed that play up a couple ways."

Andrus had three singles, including the only two hits Manning allowed in the first six innings.

The Tigers took a 1-0 lead with a two-out rally in the first. Báez singled, Eric Haase drew a walk and Torkelson singled to center.

Báez tripled with two out in the fifth, but Jimmy Lambert came out of the White Sox bullpen to strike out Haase.

Chicago threatened in the sixth when Andrus reached on shortstop Báez's throwing error, stole second and moved to third on Yoan Moncada's flyball. Manning, though, retired Jose Abreu on a routine fly to center.

Jonathan Schoop put the Tigers up 2-0 with a two-out homer off Lambert in the sixth, and Manning pitched around Eloy Jimenez's leadoff double in the seventh.

"That was a heck of a game by a young pitcher facing a team in a pennant race," Hinch said.

THE ONLY OTHER TIME

Báez finished 3-for-3 with a triple, a double, a single, a walk, a stolen base and two errors. He has 26 errors and 25 walks this season.

"I've faced these guys a lot when I was in Chicago, so I knew what to expect and I was seeing the ball really well," he said.

In the ninth, he said he lost sight of the ball after Torkelson's whiff.

"I thought the ball rolled over to their dugout and it really went right back to the pitcher," he said. "I didn't really know what to do there."