PITTSBURGH - Miguel Cabrera hit a go-ahead RBI single in the eighth and the Detroit Tigers completed a two-game sweep of the Pittsburgh Pirates with a 3-1 victory on Wednesday.

Harold Castro led off the eighth with a single off Wil Crowe (2-3) and Jonathan Schoop followed with a bloop to shallow center that Pittsburgh's Bryan Reynolds appeared to track down. Replays showed that Reynolds trapped the ball. Cabrera stepped in and delivered a sharp single up the middle, scoring Castro from second as Reynolds' throw home sailed well up the first-base line.

Schoop and Austin Meadows had two hits apiece for Detroit. Daz Cameron drove in two runs, the first with an RBI triple in the second and the second with an RBI double in the ninth to provide a little insurance for the Tigers, who bounced back after getting swept by the New York Yankees by taking two taut games from the Pirates in less than 16 hours. 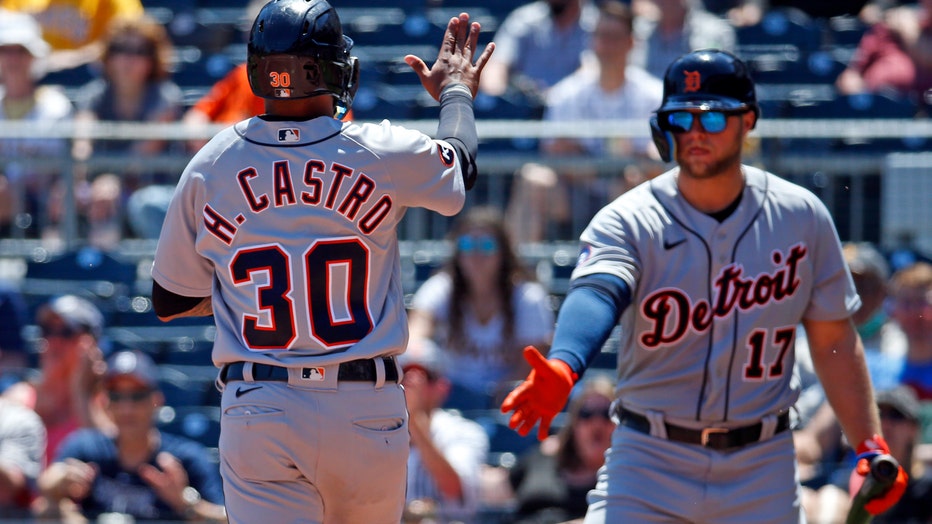 PITTSBURGH, PA - JUNE 08: Harold Castro #30 of the Detroit Tigers scores on a RBI single in the eighth inning against the Pittsburgh Pirates during inter-league play at PNC Park on June 8, 2022 in Pittsburgh, Pennsylvania. (Photo by Justin K. Aller/G

Detroit weathered a rain delay of over two hours to pull out a 5-3 victory on Tuesday. The Tigers kept it going in Wednesday's matinee to win for the seventh time in 11 games.

Will Vest (1-1) earned the win with a perfect seventh inning. Gregory Soto worked out of a two-out, two-on jam in the ninth to collect his 12th save.

Pirates starter Mitch Keller put together his second straight solid start after returning to the rotation following a brief stint working out of the bullpen.

The 26-year-old gave up Cameron's triple off the Clemente Wall in the second — which likely would have been a double had rookie right fielder Cal Mitchell played the bounce properly — but otherwise kept Detroit in check, limiting the Tigers to four hits in six innings with two walks and seven strikeouts to trim his ERA to 5.26.

Faedo matched Keller through five innings, striking out seven against one walk, his only miscue coming on an off-speed pitch to Suwinski in the fourth that ended in the seats above the 21-foot-high Clemente Wall in right field that tied the game. Faedo has allowed two runs or fewer in each of his seven big league starts.

Tigers: RHP Casey Mize (right elbow strain) experienced a setback during his rehab when asked to throw more than 90 feet. Mize is not a candidate for surgery but will meet with doctors before restarting any throwing program. The first overall pick in the 2018 amateur draft has been out since mid-April. ... OF Robbie Grossman (strained neck) homered in a rehab start for Triple-A Toledo on Tuesday night. ... LHP Tyler Alexander (left elbow strain) threw two scoreless innings in the same game.

Pirates: RHP Heath Hembree (right calf strain) was scheduled to begin a rehab assignment at Triple-A Indianapolis on Wednesday. ... 1B Yoshi Tsutsugo (back) has resumed light baseball activities but will not accompany the club on the eight-day road trip that starts Thursday.

Tigers: Are off Thursday before beginning a 10-game homestand on Friday when Toronto visits for a three-game series.