DETROIT - Willi Castro and Akil Baddoo scored on third baseman Ke’Bryan Hayes’ two-out error during Detroit's three-run fifth inning, and the Tigers edged the Pittsburgh Pirates 3-2 on Wednesday in the first game of a doubleheader.

The Tigers finished with just three hits, but they scored three unearned runs on their way to their second victory in nine games. Alex Lange (1-1) got two outs for the win, and Gregory Soto worked the ninth for his fourth save.

"We have a great bullpen," starting pitcher Michael Pineda said. "They did a very good job of holding the game. We're excited to have a bullpen like that because we can win a lot of games." 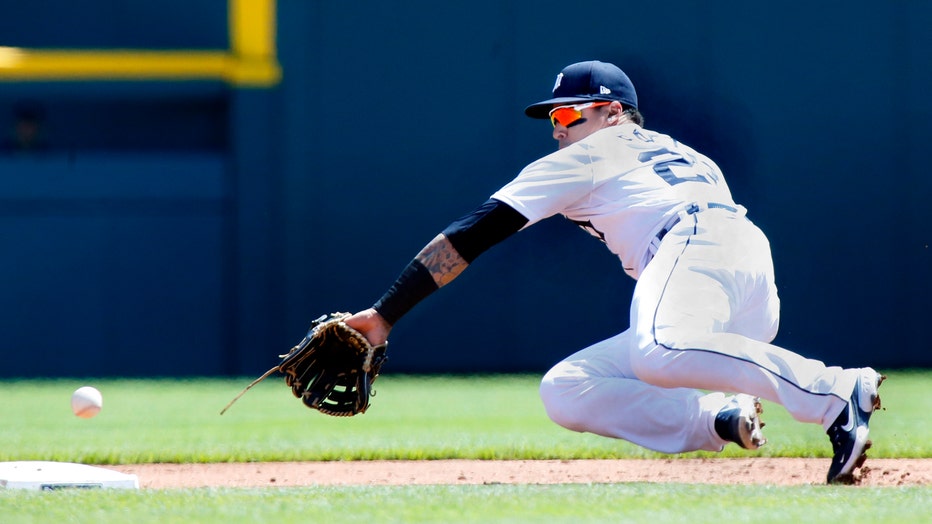 DETROIT, MI - MAY 4: Shortstop Javier Baez #28 of the Detroit Tigers dives to stop a grounder hit by Bryan Reynolds of the Pittsburgh Pirates during the third inning of Game One of a doubleheader at Comerica Park on May 4, 2022, in Detroit, Michigan.

Dillon Peters pitched 3 1/3 innings for Pittsburgh, stretching his season-long scoreless streak to 16 2/3 innings. Bryse Wilson (0-1) struck out six in 3 2/3 innings, but was charged with the loss.

"We’ve got a long few days ahead of us and I just wanted to get out there and just attack them early, and get ahead early," Peters said. "And I thought Bryse and I — Wil (Crowe), too — did a great job getting ahead of those guys and keeping them on their heels."

The Pirates lost for the sixth time in seven games.

Pittsburgh took a 2-0 lead in the fifth on Ben Gamel's two-run triple off Lange.

Detroit responded in the bottom half. Jeimer Candelario led off with a double and Castro reached on an error by shortstop Cole Tucker.

Báez turned in some nifty defense at shortstop, including a memorable play while positioned to the right of second base in a shift against Bryan Reynolds.

Báez dove to his right to stop Reynolds' grounder, and then flipped the ball with his glove between his legs to Candelario to force out Gamel at second base.

"I was almost jumping around on the mound. It's exciting to see Javy make a play like that," Pineda said. "I love to see Javy play the game because the way he plays, everybody loves it. He plays really hard and we're excited to have him here."

Tigers: LHP Tyler Alexander had an MRI that confirmed an elbow sprain and no structural damage. He's on the 15-day injured list.

The Pirates activated left-hander Anthony Banda from the 10-day injured list and optioned lefty Aaron Fletcher to Triple-A Indianapolis. ... Pittsburgh added lefty Aaron Fletcher as the 27th man for the second game of the doubleheader, while Detroit added right-hander Alex Faedo. ... Tigers catcher Dustin Garneau, who was designated for assignment, cleared waivers and was outrighted to Triple-A Toledo.

Tigers: Faedo will make his major league debut in Game 2. Faedo, who missed last season after undergoing Tommy John surgery, was called up from Triple-A Toledo after tossing five scoreless innings with eight strikeouts against Omaha in his last start.