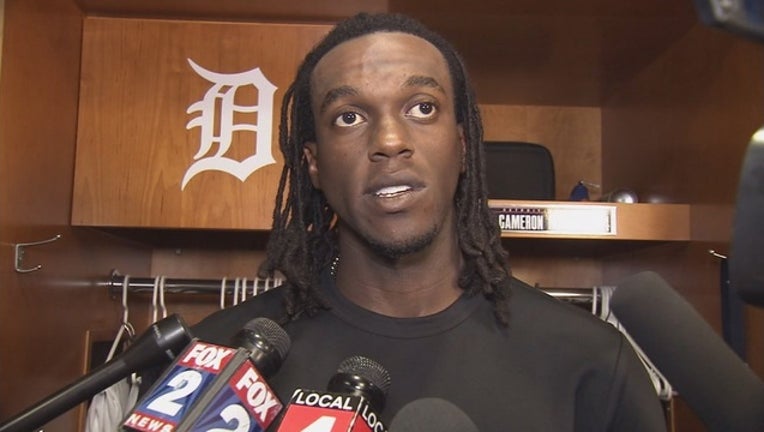 Cameron Maybin capped a dramatic eight-run ninth with a tiebreaking three-run double, and the Tigers overcame a five-run deficit to beat the Tampa Bay Rays 10-7 on Thursday night.

Maybin's drive to left-center cleared the bases to put Detroit up 10-7.

"I was just hoping the snowball would keep rolling down the hill," Tigers manager Brad Ausmus said. "The energy is kind of building as you sense there is a chance you can win the game. It just keeps building until you get that go-ahead run."

"That was one contagious inning for them," Rays manager Kevin Cash added.

"You have a five-run lead," Cash said. "We have pitchers capable of going out and getting the job done."

Winner Anibal Sanchez (5-8) gave up two runs in two innings. Francisco Rodriguez got the final three outs for his 22nd save.

Maybin was 3 for 4 with four RBIs.

Nick Franklin had a three-run pinch-hit double during a four-run third inning for the Rays, who had won two of three after an 11-game losing streak.

Franklin pinch hit for Desmond Jennings with the bases loaded and put the Rays up 5-0 on an opposite-field flare to left that landed in front of Upton and took a strange bounce past the outfielder.

Jordan Zimmermann allowed five runs and nine hits in six innings for the Tigers. He has given 12 runs over 9 2/3 innings in his last two starts.

Rays RF Steven Souza Jr. (strained left hip) hit two long homers and went 5 for 9 in a simulated game Thursday. Souza, scheduled to start a rehab assignment Friday with Class A Charlotte, went deep off Alex Cobb and Chase Whitley, who are both coming back from Tommy John surgery. "Feel bad for them," Souza said with a smile. "They'll be all right." Souza and Franklin had back-to-back homers during a one-inning stint against Whitley, who did make a nice play in catching Souza's foul pop-up. Cobb threw 36 pitches over two innings and could start a rehab assignment next week.

Tigers: RHP Michael Fulmer (7-2) looks to extend his stretch of allowing one run or fewer over eight consecutive starts Friday night against the Rays. His current seven-game run ties Justin Verlander (2011) and Al Benton (1945) for the longest by a Tigers pitcher since 1913.