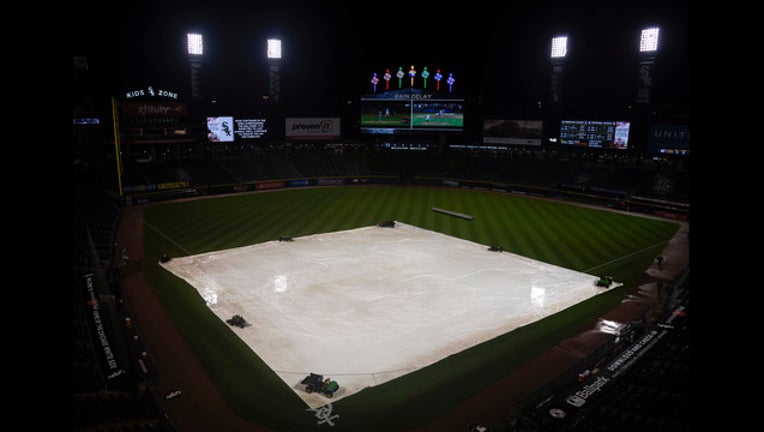 CHICAGO, IL - AUGUST 31: A tarp sits on the field during a rainy delay in the third inning of a game between the Chicago White Sox and the Boston Red Sox on August 31, 2018 at Guaranteed Rate Field. (Photo by David Banks/Getty Images)

CHICAGO (AP) - Saturday night's game between the Detroit Tigers and White Sox has been postponed because of snow.

The game will be made up as part of a split doubleheader on Wednesday, July 3, with the makeup game starting at 1:10 p.m.

Snow began late in the morning, and it is forecast to continue into the night. Chicago is under a winter storm warning until early Sunday morning.

With the postponement, the White Sox will push back Saturday's scheduled starter Reynaldo Lopez (1-3) to Sunday and the Tigers will stay with scheduled Sunday's starter Matthew Boyd (2-1). Ryan Carpenter was originally scheduled to make a spot start for the Tigers on Saturday.

The White Sox will update outfielder Eloy Jimenez's status before Sunday's game. Jimenez sprained his left ankle in Friday's win over the Tigers.