DETROIT - Abraham Toro hit a go-ahead, two-run homer in the seventh inning and the Seattle Mariners beat the Detroit Tigers 5-3 on Wednesday night for their fifth win in six games.

Toro, recalled from Triple-A Tacoma on Tuesday, had two hits. Eugenio Suarez also hit a two-run homer for the Mariners.

Seattle starter Marco Gonzales (10-12) allowed three runs and seven hits in six innings. Paul Sewald worked around two walks in the ninth to get his 17th save. 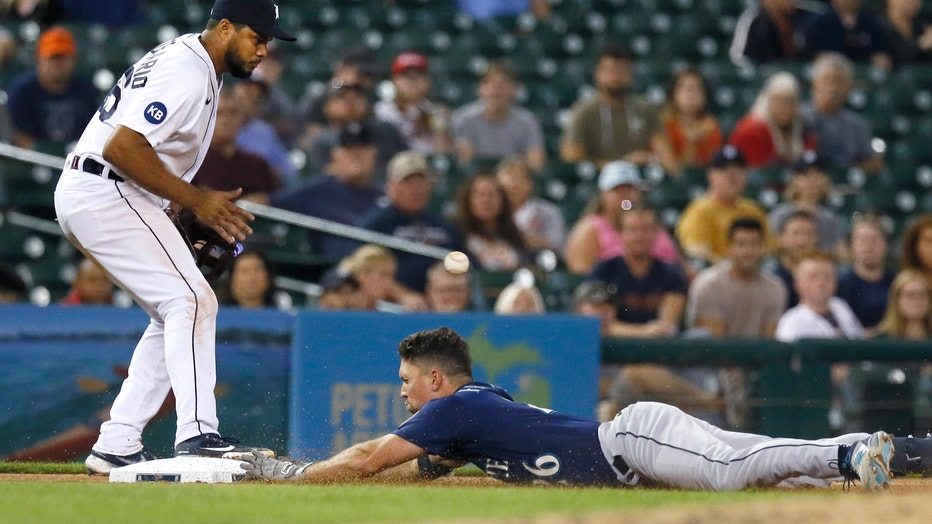 DETROIT, MI - AUGUST 31: Adam Frazier #26 of the Seattle Mariners beats the throw to third baseman Jeimer Candelario #46 of the Detroit Tigers to stretches a hit into a triple during the seventh inning at Comerica Park on August 31, 2022, in Detroit,

Suarez's 25th homer of the season came on a 3-0 pitch from Alexander in the first inning.

Seattle regained the advantage when Toro followed Adam Frazier's triple with a one-out blast off Lange in the seventh. Ty France drew a bases-loaded walk in the ninth to give the Mariners a two-run lead.

Scott Servais managed his 1,000th game for the Mariners on Wednesday. Servais has managed the second-most games in Mariners history, trailing only Lou Piniella (1,551 games).

Mariners: LHP Matthew Boyd and OF Taylor Trammell will be activated when the rosters expand to 28 players on Thursday. Boyd made 143 starts for Detroit from 2015-21 and signed with San Francisco as a free agent during the offseason while recovering from left flexor tendon surgery. Boyd, who was traded to Seattle in early August but has yet to make his season debut, will be used out of the bullpen. Trammell has appeared in 32 games with the Mariners this season, batting .235 with three homers.

Tigers: 1B Spencer Torkelson and INF Ryan Kreidler will be activated when rosters expand on Thursday. Torkelson batted just .197 in 83 games with Detroit before getting demoted to Triple-A Toledo, where he hit .228 with five homers in 34 games. Kreidler batted .213 with eight homers in 56 games with the Mud Hens. ... RHP Michael Pineda (right tricep tightness) will also be activated from the 15-day injured list. Pineda's last major-league appearance was July 23.

Mariners; SS J.P. Crawford (strained pectoral muscle) didn't start the game but entered as a defensive replacement in the eighth.

Tigers: LHP Eduardo Rodriguez (3-3, 3.60 ERA) has won both of his starts since coming off the restricted list. Rodriguez has a 4-3 record and 3.46 ERA in nine career outings against Seattle.