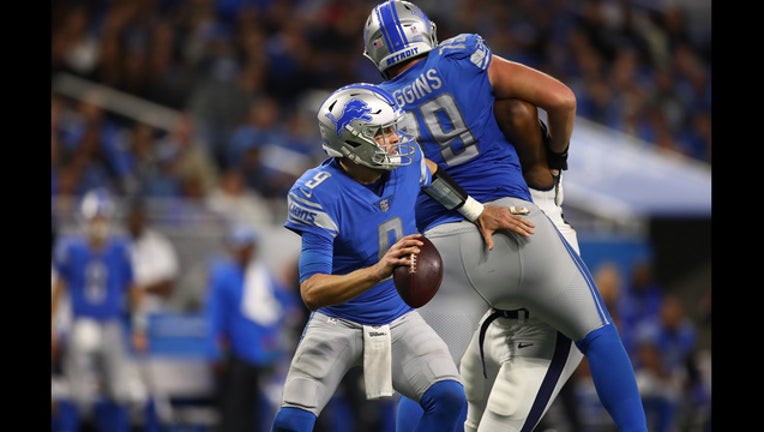 DETROIT, MI - DECEMBER 02: Quarterback Matthew Stafford #9 of the Detroit Lions tries to avoid the rush from the Los Angeles Rams during the second halfat Ford Field on December 2, 2018 in Detroit, Michigan. (Photo by Gregory Shamus/Getty Images)

DETROIT (AP) - The Detroit Lions tried to make it work without experienced weapons around quarterback Matthew Stafford on Sunday.

Once again, the offense couldn't do enough as the home team lost 30-16 to the Los Angeles Rams, the Lions' fifth loss in six games.

Without three of its top skill position players from the beginning of the season, coach Matt Patricia's staff was scrambling to move the ball against the Rams. Offensive coordinator Jim Bob Cooter dialed up a touchdown pass to an offensive tackle, used a reserve lineman as a fullback, and attempted a wide receiver pass by Bruce Ellington. Detroit also attempted two onside kicks, but recovered neither.

"Everybody understood that we were trying to do everything we could to keep it tight," Patricia said. "There were some things we're trying to do, by design, to give us a little bit of an advantage in the game."

However, the team failed too many times on third down, going 2 for 12 (17 percent) on what Stafford called the "money" downs, often going with conservative play calls.

For the Lions, wide receiver Golden Tate was traded to Philadelphia on Oct. 30, wide receiver Marvin Jones (knee) is out for the season, and running back Kerryon Johnson (knee) missed his second straight game.

The Lions (4-8) scored 16 points for the second straight week. Detroit has scored 22 points or fewer in each of the last six games, losing five.

"We have some new guys in some new places obviously," Stafford said. "We're trying to develop some of those (bread-and-butter plays), to tell you the truth. It's the constant battle in the NFL, really for every team. You have to figure out what's working in that game against a certain opponent."

Even when the Lions caught breaks against the Rams, they couldn't capitalize.

After Quandre Diggs made an interception early in the second quarter, the Lions went three-and-out, gaining 2 yards.

In the third quarter, after a horse-collar penalty on Ndamukong Suh gave them first-and-goal from the 4-yard line, the Lions went backward and settled for a 29-yard field goal, one of Matt Prater's three. The crowd booed as Cooter called a draw play to Theo Riddick on third-and-goal from the 19, gaining 11 yards.

Later, Cooter dialed up a wide receiver screen for Ellington on third-and-13, falling 8 yards short with the Lions trailing 16-13 in the fourth quarter, forcing a punt.

Detroit went 1 for 5 in the red zone, while the defense kept it close for three quarters against the high-powered Rams.

"We just have to do a better job of making the play when it's there," Stafford said.

Cooter inserted reserve lineman Joe Dahl as a fullback on three plays, and also called a pass to tackle Taylor Decker that went for an 11-yard touchdown.

"I thought it was a great add (to the playbook), the situation was perfect," Stafford said. "I think our crowd got really loud when he was telling everybody that 68 reported eligible, which I thought was great."

Decker said the play was added late in the week and his heart rate went up when it was called.

"I walked into breakfast one morning, heard that they were going to have a little wrinkle for me, and I literally said, 'I'm going to score a touchdown right now,'" Decker said. "We ran it once (in practice). It's more of a scheme thing. It's not like I'm beating any man coverage."

But even with the trickery, the offense couldn't provide enough.

Kenny Golladay was targeted twice in the first half, and the Lions were led in receptions by seven from Ellington, a midseason pickup. Tight end Levine Toilolo's four tied the career high for the six-year pro.

"We've got to find a way to win, that's the biggest thing," Patricia said. "We're in the game, we just have to keep grinding it out and in the end we've got to try to figure out how to get that scoreboard to reflect in the end that we're winning."