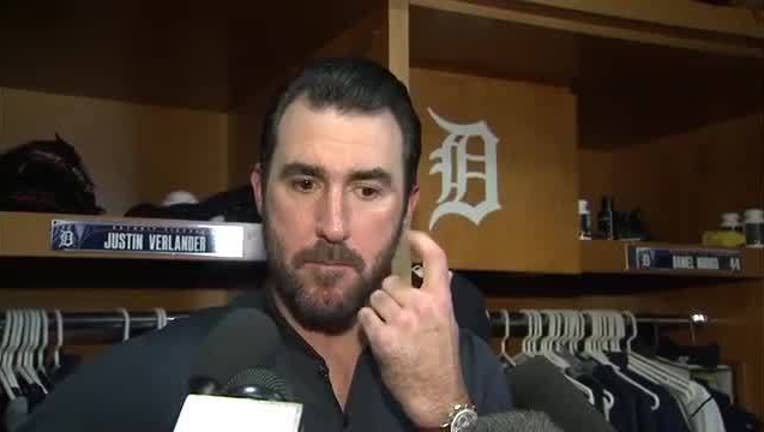 MINNEAPOLIS (AP) - For five innings Friday night, everything was working for Justin Verlander, Miguel Cabrera and the Detroit Tigers.

It all unfolded in frustrating fashion in the sixth.

Verlander stumbled again, Cabrera left after straining his right groin and Detroit wasted a three-run lead against the Minnesota Twins, who burst ahead when Eddie Rosario hit a three-run homer that capped a six-run sixth inning in a 6-3 victory.

Cabrera, a two-time AL MVP, had three hits but was hurt in the sixth when he dove for a ground ball by Robbie Grossman that got past Cabrera and second baseman Ian Kinsler to score two runs. Cabrera felt it again when he stretched for a throw from third baseman Nicholas Castellanos on Brian Dozier's inning-ending grounder.

Cabrera was replaced at first base by Alex Avila to start the seventh and the team announced he would be re-evaluated Saturday.

"When he got back into the dugout after the inning, he let the trainers know and we just removed him from the game," Tigers manager Brad Ausmus said.

Grossman chased Verlander with a two-run single, Jorge Polanco singled in the tying run against Joe Jimenez and Rosario hit an opposite-field homer to left.

"I know I faced him the first time actually in Detroit, I remember the fastball goes up," Rosario said of Jimenez. "But I waited for this pitch and he threw me first pitch."

Verlander, whose ERA rose to 6.04, allowed four runs, three hits and six walks - one shy of his career high - in five-plus innings. He had been 12-1 in his previous 18 starts against the Twins.

"Inexcusable there," Verlander said. "I just lost my tempo and rhythm. That many walks, with us up like that, that can't happen."

Hector Santiago (2-1) gave up three runs and seven hits in 6 1/3 innings, and Ryan Pressly, Taylor Rogers and Brandon Kintzler combined for one-hit relief. Kintzler got his fourth save in as many chances.

Victor Martinez and Justin Upton had RBI hits as the Tigers took a 2-0 lead in the third, and James McCann hit his fourth homer in the sixth.

Both teams were coming off being swept in their last series.

"It was just a good win," Twins manager Paul Molitor said. "We kind of feel like you need one after kind of stumbling through the last series."

Rosario, Santiago and Jimenez all played together for Puerto Rico in the WBC and the team has kept a chat going since the tournament. Santiago said Jimenez would hear about giving Rosario a first-pitch fastball.

"I think that young factor comes into play there, where you got a guy up there that loves fastballs," Santiago said of the rookie Jimenez. "You got to understand that. He'll learn.

"We'll say thank you to him tonight in our group chat and we'll say, 'Appreciate you giving it.' We're definitely going to talk about that tonight, for sure. But thanks Joe and attaboy Rosie."

Tigers: SS Jose Iglesias was placed on the seven-day concussion DL, retroactive to Thursday. Iglesias took a knee to his jaw on the final play of Wednesday's game.

Rookie LHP Adalberto Mejia (0-1, 4.05 ERA) is to start for Minnesota on Saturday and LHP Matt Boyd (2-1, 3.77) for Detroit. Mejia's rotation spot was skipped when Minnesota's game on Wednesday was rained out. Boyd beat the Twins on April 11 with six scoreless innings.