The Tigers went ahead to stay with three runs in the third against Jonathan Heasley (3-8). Reyes snapped a 1-1 tie with an RBI triple. Báez doubled in Reyes and then scored on Castro's single. 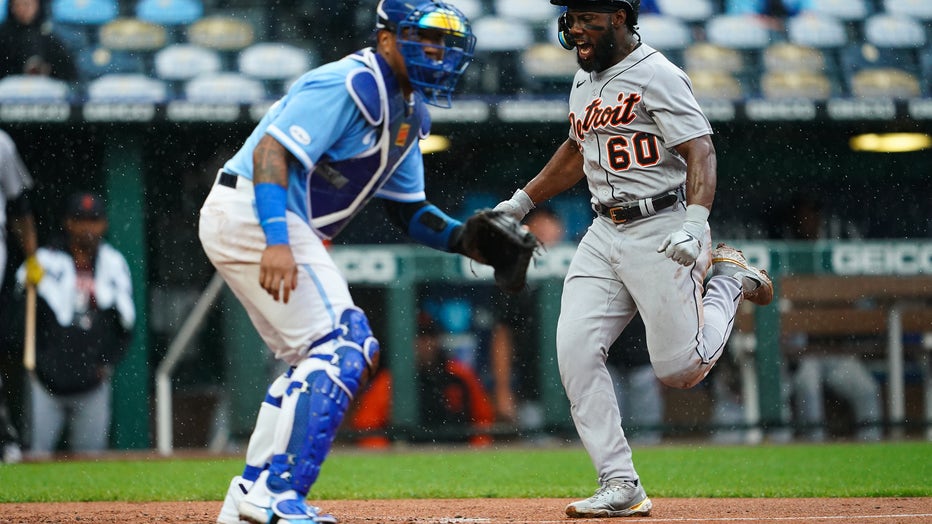 KANSAS CITY, MISSOURI - SEPTEMBER 10: Akil Baddoo #60 of the Detroit Tigers beats tag from Salvador Perez #13 of the Kansas City Royals to score during the third inning at Kauffman Stadium on September 10, 2022 in Kansas City, Missouri. (Photo by Kyl

Heasley was charged with seven runs and seven hits in four-plus innings. The right-hander had gone 2-1 with a 2.86 ERA in his previous four starts.

Manning allowed two earned runs, struck out four and walked one. Since returning from the IL on Aug. 2, Manning has a 3.74 ERA over eight starts.

It's the longest win streak for Detroit since a string of six straight victories in July.

Salvador Perez had two hits for Kansas City and drove in a run.

Kerry Carpenter homered for Detroit in the second, tying it at 1. The Tigers, last in the majors with 88 homers, have hit eight in the past three games.

Saturday's game was moved to the afternoon to avoid anticipated inclement weather, but it was played in a steady drizzle and then stopped in the bottom of the eighth after a 58-minute delay.

Detroit collected three triples for its highest total in a single game since Sept. 1, 2012. It has 18 extra-base hits in its last three games.