DETROIT - Anthony Mantha is picking up where he left off last season, giving the Detroit Red Wings hope the power forward can help them avoid enduring another rebuilding season.

Mantha scored a career-high four goals Sunday night, the last with 53.3 seconds left to give Detroit a 4-3 victory over the Dallas Stars night in its home opener.

In the season-opening win at Nashville, he had a goal and two assists.

"We beat two of the best teams out there," Mantha said. "People rank those two teams among the top 10 in the league." 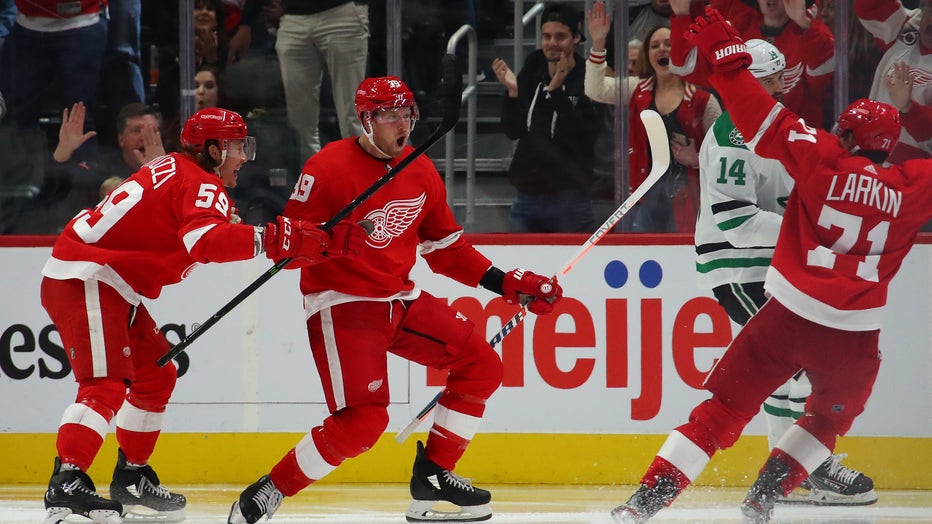 DETROIT, MICHIGAN - OCTOBER 06: Anthony Mantha #39 of the Detroit Red Wings celebrates his third goal of the game with Dylan Larkin #71 and Tyler Bertuzzi #59 while playing the Dallas Stars at Little Caesars Arena on October 06, 2019 in Detroit, Mich

Over the last 10 games of his third full year in the NHL, Mantha has 22 points.

"Confidence has been high since last season," he said. "Just putting myself in the right spot."

Mantha became the first Red Wing to score at least four goals in a game since Johan Franzen had five in 2011. He's the first to do it in a home game since Brendan Shanahan pulled off the feat in 2001. The last player in franchise history to score all of the team's goals in a victory with at least four goals was Sergei Fedorov, who had five in a 1996 game.

Mantha isn't flourishing by himself.

He is taking full advantage of playing on Detroit's top line with center Dylan Larkin and wing Tyler Bertuzzi, who has five points in two games.

"That line was dominant," Dallas coach Jim Montgomery said. "One of our keys to success was shutting down that line. We didn't do the job."

The Stars are expected to contend for the Stanley Cup this season, but they're off to a historically bad start. They're 0-3 for the first time since 1988 since the franchise was located in Minnesota.

"We just have to be better than this," said Jamie Benn, who doesn't have a point in three games. "We can't take that many penalties against a good young team, especially with that kind of speed."

Dallas was called for eight penalties, but Detroit scored only once with an extra skater. The Red Wings had a 5-on-3 power play for 40 seconds midway through the third and failed to take advantage.

Mantha's final goal was set up by Filip Hronek's centering pass after Larkin won a faceoff. Mantha also scored early in the third to put Detroit ahead and Roope Hintz pulled Dallas into a 3-all tie 33 seconds later with his second goal.

Dallas, shooting for its first win in three games, led 2-0 after the first period after Hintz and Tyler Seguin scored.

Anton Khudobin made 29 saves for the Stars, who pulled their goaltender to add an extra skater in the final minute and put pressure on Bernier to hold on for the victory. Video review was used with 1.6 seconds left to determine Alexander Radulov didn't score when he tried to stuff the puck past Bernier.

"You know they're going to throw everything they had at us," Bernier said. "We found a way to win."

NOTES: Red Wings D Trevor Daley left the game with a lower-body injury and F Frans Nielsen went off the ice late in the game after being hit in the head by a puck. ... Stars D Roman Polak was scratched with an upper body injury. ... Red Wings C Andreas Athanasiou was scratched with a lower-body injury. ... Dallas lost its first two games by a goal to the Stanley Cup champion St. Louis Blues and the Eastern Conference champion Boston Bruins.

Stars: At Washington on Tuesday night.