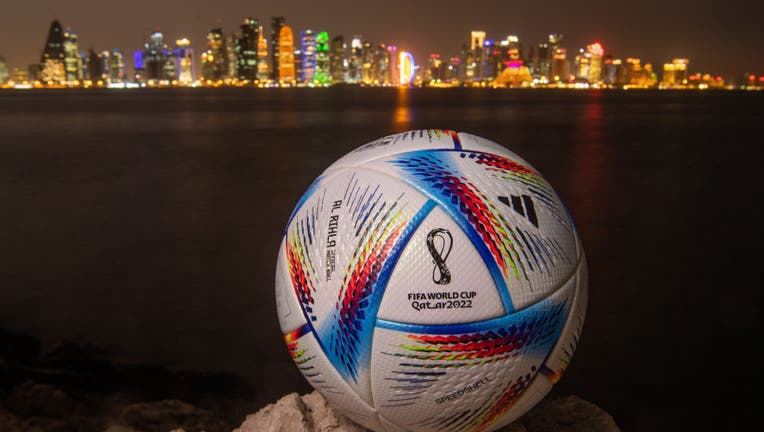 DETROIT (FOX 2) - More than a decade since Qatar was selected as the host of the 2022 FIFA World Cup, the games are nearly here.

It's one of the most eagerly anticipated World Cups in memory — as much for off-the-field reasons as those on it — and it begins Sunday in Qatar.

A total of 64 matches are scheduled, which, for those doing quick math, means more than one match will be played on the majority of days.

Every game of the World Cup will be on FOX and on FS1 with the championship game on Sunday, Dec. 18 at 10 a.m.

Americans are expected to gamble $1.8B on the World Cup this year

The tournament will be played from Nov. 20 to Dec. 18 — with group matches from two top teams scheduled for Thanksgiving Day. Get ready for a new kind of Turkey Day "football."

Thomas Magee's Sporting House and Whiskey Bar is just south of Eastern Market is going to be a hot spot for games the first two weeks, starting at 8 a.m.

Look, the 5 a.m. start is an early start time to have a cold one on tap - but those later games are the perfect time for breakfast and drinks.

RELATED: World Cup 2022 odds: Lines for every team to win in Qatar

It's an Irish pub and whiskey bar in Corktown. OF COURSE McShane's will have the games on.

McShane's will opens at 10 a.m. every week day and will feature USMNT opening game on Monday, Nov. 21 against Wales.

McShane's Irish Pub and Whiskey Bar is at 1460 Michigan Ave in Detroit.

For soccer fans in Detroit, there are probably fewer places specifically meant to watch soccer than the Detroit City Clubhouse, which is inside the DCFC Fieldhouse.

Similar to Thomas Magee's, DCFC Clubhouse will be showing every World Cup starting at 8 a.m. - this does not include games on Thanksgiving.

The fieldhouse will have food and drink specials during each game and offers WiFi plus a conference room for anyone who needs to "work from home" during the games.

The fieldhouse already shows every DCFC game and, though they're done for the year, the fieldhouse is ready for the World Cup.

The clubhouse is at 3401 E Lafayette St in Detroit.

We're not saying Conor O'Neil's is our favorite but they did have the World Cup schedule listed directly on their homepage.

The Ann Arbor pub is showing all games starting with the opener featuring Qatar and Equator at 11 a.m. on Sunday, Nov. 20. Games begin in earnest on Monday, Nov. 21 and Conor O'Neil's will be open in time for the 8 a.m. games every day.

The restaurant is branded as World Cup HQ and will show at least the Team USA games, according to their social media pages.

There are six different Hamlin Pubs throughout southeast Michigan including Chesterfield, Clarkson, Shelby Twp, and Rochester.

Catch all the USMNT games at Firebird Tavern in Detroit.

All the World Cup action will be shown at New Dodge Lounge in Hamtramck.

The Oak Park brewery has plans to show the USMNT vs. Wales game on Nov. 21.

Vida Voyager, a store in Plymouth, is hosting a watch party at Kellogg Park when the USMNT takes on Iran.