DETROIT - Carlos Rodón was pulled after a rocky third inning and the Chicago White Sox, closing in on the AL Central title, squandered a three-run lead in a 4-3 loss to the Detroit Tigers on Monday night.

Despite the defeat, Chicago's magic number to clinch the division dropped to two when second-place Cleveland was swept by Kansas City in a doubleheader.

The White Sox can wrap up their first AL Central crown in 13 years Tuesday — and secure a second consecutive playoff berth for the first time in franchise history — with a win over Detroit and another Indians loss to the Royals.

"Obviously, we know the number is going to go down when Cleveland loses, but we need to worry about ourselves," White Sox manager Tony La Russa said. "We can’t rely on other teams." 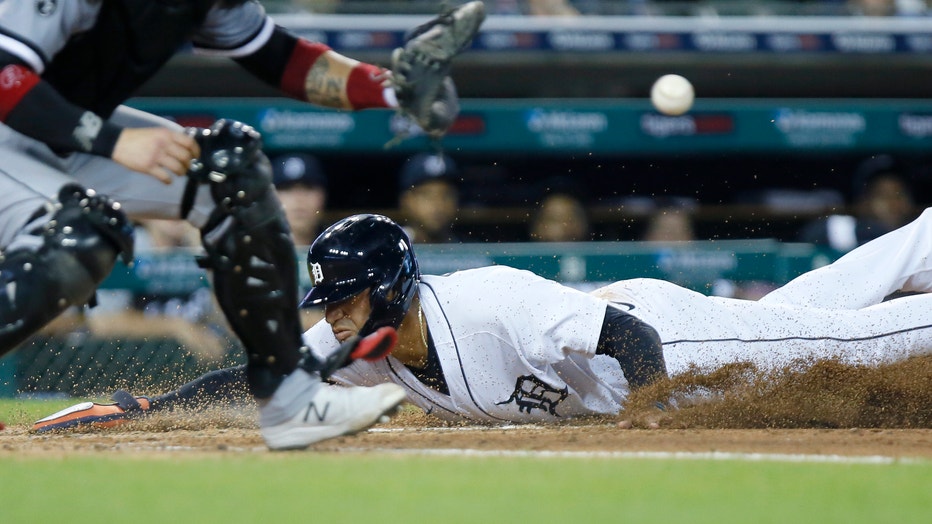 DETROIT, MI - SEPTEMBER 20: Victor Reyes #22 of the Detroit Tigers beats the throw to home plate to score against the Chicago White Sox on a sacrifice fly ball hit by Miguel Cabrera #24 during the third inning at Comerica Park on September 20, 2021,

In the short term, though, the biggest issue for Chicago might be the uncertainty over Rodón's status.

After the game, La Russa said he was concerned about the soreness Rodón reported and wasn't sure he would make his final scheduled start of the regular season. Rodón is 12-5 with a 2.47 ERA.

"He was pitching with eight or nine days of rest," La Russa said. "At this point, we have to assume the worst and hope for the best. That's a tired cliche, but that's where we are."

Rodón, though, said he wasn't concerned and shut down his postgame interview session on Zoom after repeated questions about his status.

"It's just normal soreness — nothing crazy," he said. "I think we're good here."

Harold Castro's eighth-inning single broke a 3-all tie for Detroit.

With two outs in the eighth, Craig Kimbrel (2-2) hit Robbie Grossman with a pitch. Grossman stole second and Castro drove a 2-2 pitch through the infield.

"Once Robbie got to second base, I'm not sure there's anyone in our lineup I'd rather have up there to get us a single than Harold," Tigers manager A.J. Hinch said. "I don't care who is pitching."

Castro had a game-winning single against Kimbrel in a 9-8 Tigers win over the Chicago Cubs on May 15.

"I wasn't thinking about that, but it obviously gives you a lot of confidence when you can get big hits against a great pitcher like that twice in one year," Castro said.

Drew Hutchison (2-1) picked up the win with two scoreless innings of relief. Tigers rookie Alex Lange pitched the ninth for his first career save, becoming the eighth Detroit reliever to earn a save this season.

"We didn't have much left down there, so I was just trying to figure out how to put the last few innings together," Hinch said.

Neither starter was involved in the decision.

Rodón, pitching for the first time since Sept. 10, gave up three runs on two hits and two walks while striking out six. The left-hander, who had won four straight starts, received extended rest after his previous turn was pushed back because of shoulder soreness.

Both teams scored three times in the third.

With the bases loaded and none out, Yoan Moncada grounded into a force at second, making it 1-0 with runners on the corners. Yasmani Grandal followed with a sacrifice fly and Eloy Jimenez put Chicago ahead 3-0 with an RBI double.

Detroit made it 3-1 on Victor Reyes' RBI single in the bottom of the inning, putting runners at the corners. Jonathan Schoop hit a grounder to second baseman Cesar Hernandez, who lunged to try to tag Reyes with his glove while holding the ball in his throwing hand.

"That's a play that happens," La Russa said. "He's played great second base for us all year and I'm not going to crucify him for one mistake."

Hernandez's throw to first was too late to get Schoop, and a run scored as Reyes made it safely to second. He moved to third on a fly ball by Grossman and scored on Miguel Cabrera's sacrifice fly.

"Our team put up three runs and they needed a shutdown inning from me," Rodón said. "I'm really disappointed that I went out there and gave it right back."

Much of the game was played in light rain, although it never got hard enough to cause a delay.

Cabrera's third-inning sacrifice fly was the 1,800th RBI of his career, making him the 20th player to reach that mark since 1920.

Cabrera exited after two at-bats with back stiffness, but Hinch didn't think the veteran slugger would miss any games. He needs 21 hits to become the first player to reach 500 homers and 3,000 hits in the same season.