CHICAGO - Pinch-hitter A.J. Pollock hit a tiebreaking two-out RBI single in the eighth inning and the Chicago White Sox rallied to beat the Detroit Tigers 4-2 on Sunday for their second straight win.

Pollock's hit got past the reach of second baseman Jonathan Schoop to score Luis Robert from second and put Chicago ahead 3-2. Eloy Jiménez followed with an RBI single to make it 4-2. Both hits were off reliever Gregory Soto.

The runs were both unearned. Robert reached second with two outs when left fielder Robbie Grossman struggled with the sun in his eyes and the ball dropped off the heel of his glove for an error. Jose Abreu was intentionally walked before Pollock's hit.

Gavin Sheets homered and had two hits for the second straight game. His solo shot in the sixth tied it at 2. Yoan Moncada had an RBI single in the fifth. 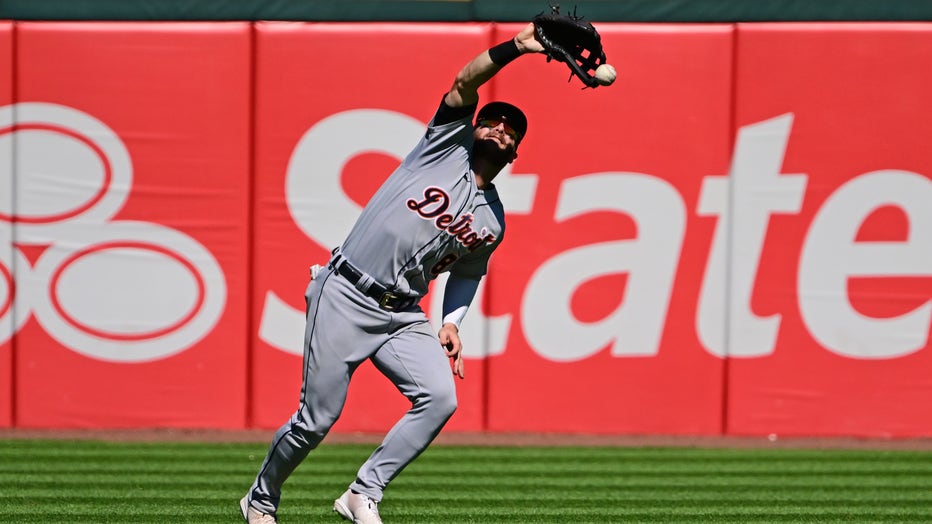 CHICAGO, ILLINOIS - JULY 10: Robbie Grossman #8 of the Detroit Tigers commits a fielding error trying to attempting to catch a fly ball hit by Luis Robert of the Chicago White Sox in the eighth at Guaranteed Rate Field on July 10, 2022 in Chicago, Il

Javier Báez hit a two-run homer for the Tigers, who dropped their second straight following a six-game winning streak.

Kendall Graveman (3-1) pitched a scoreless eighth for the win. Liam Hendriks tossed a perfect ninth for his 17th save.

Báez played his first seven-plus seasons with the crosstown Cubs and was booed by South Side fans before each plate appearance. The shortstop took his time leaving the batter’s box when he went deep in the first and watched his ninth homer sail into the left field bullpen.

Kopech has struggled since a fluid buildup in his right knee forced him to leave in the first inning against Texas on June 12. The right-hander has a 6.15 ERA since that outing.

Kopech’s first five pitches missed the strike zone. The right-hander’s sixth might have been high and inside, but the free-swinging Baez turned on it for a 2-0 Detroit lead.

Moncada’s RBI single in the fifth cut it to 2-1. Sheets homered to right-center on Hutchison’s full-count pitch with two outs in the sixth to tie it.

Tigers: RHP Rony Garcia (right shoulder soreness) will throw a bullpen session on Monday. He joined Detroit’s rotation in late May, then experienced a "pinch" in his shoulder when throwing on the side following a start on June 29.

White Sox: Shortstop Tim Anderson, a starter for the AL in the All-Star Game, got the day off. Leury Garcia took his place in the lineup. Manager Tony La Russa said Anderson will get another day off before the break "because he’s very active on his legs" in playing his position. ... Eloy Jiménez started in left on Sunday after getting Saturday off as he works his way back from surgery for a hamstring tendon tear. ... Coaches and training staff checked on Kopech with one out in the second inning, but he remained in the game

White Sox: RHP Lance Lynn (1-1, 5.33) takes the mound Monday at Cleveland as Chicago opens an eight-game road trip against the Indians and Twins, the AL Central rivals it hopes to catch in the division.