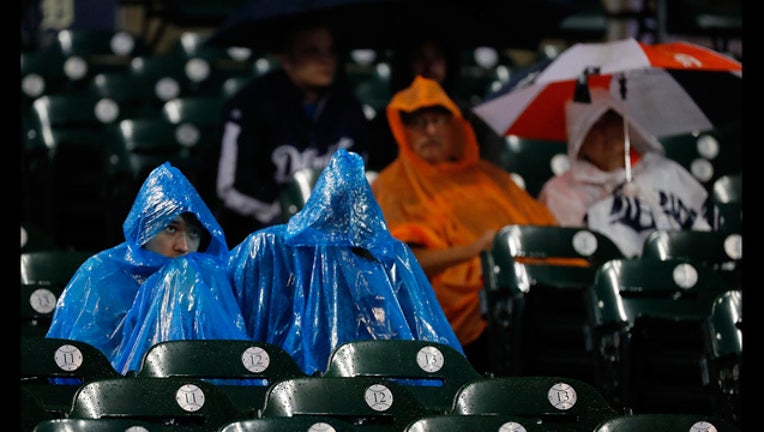 DETROIT, MI - SEPTEMBER 28: Baseball fans wait for the rain to stop during the rain delay of the game between the Cleveland Indians and the Detroit Tigers on September 28, 2016 at Comerica Park in Detroit, Michigan. (Photo by Leon Halip/Getty Images)

DETROIT (AP) - The game between the Detroit Tigers and Chicago White Sox has been postponed because of rain and rescheduled as part of a doubleheader on Aug. 6.

The teams will wrap up the series on Sunday with a different approach to pitching. The Tigers will bump left-hander Daniel Norris (0-0, 4.32 ERA) to Sunday, while the White Sox will skip right-hander Ervin Santana (0-1, 10.38) in favor of right-hander Reynaldo Lopez (1-2, 8.84).

Norris will make his first start of the season and seek his first win since Sept. 28, 2017.

Both managers missed the end of Friday night's 7-3 Chicago win. Detroit's Ron Gardenhire was ejected in the fifth inning for arguing with the plate umpire. Rick Renteria was serving a one-game suspension for his role in a bench-clearing fracas Wednesday against Kansas City.