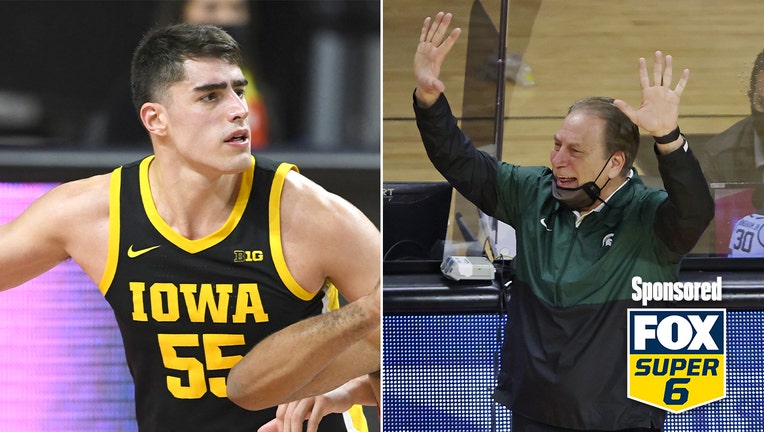 LEFT: Luka Garza #55 of the Iowa Hawkeyes in position during a college basketball game against the Maryland Terrapins on January 7, 2021 at the XFinity Center in College Park, Maryland. (Photo by Mitchell Layton/Getty Images) RIGHT: Head coach Tom Iz

Both Michigan State and Iowa are on a little bit of a cold stretch as the first games of February arrives in the Big Ten.

However, you could get hot and win $1,000 when the Spartans and the Hawkeyes meet on Tuesday night (7 p.m., FS1) in a critical Big Ten contest at Carver-Hawkeye Arena in Iowa City.

And you could win right along with it with FOX Super 6. Just download the Super 6 app, predict the right answers to the six questions on this game and you could win $1,000.
It’s that simple:

Here’s the questions and how to look at it.
Which team will score the last point of the first half?
Michigan State or Iowa
In eight games within the Big Ten, Michigan State has been outscored by conference opponents by a margin of 260-237. It is a large reason why the Spartans have been struggling in conference play at 2-6 (Michigan State is 8-6 overall and looks on the bubble of an NCAA Tournament berth.) Iowa is outscoring Big Ten opponents by a 360-310 margin.

Who wins: Michigan State or Iowa?
This is starting to feel like crunch time for the Spartans, who have made the NCAA Tournament in every year since 1997. They need to keep their heads above water and get a marquee win. But Garza is such a difference maker and the Hawkeyes are still looking for one of those top seeds. They also have a two game losing streak to Indiana and Illinois that needs to get snapped. The talent favors Iowa.