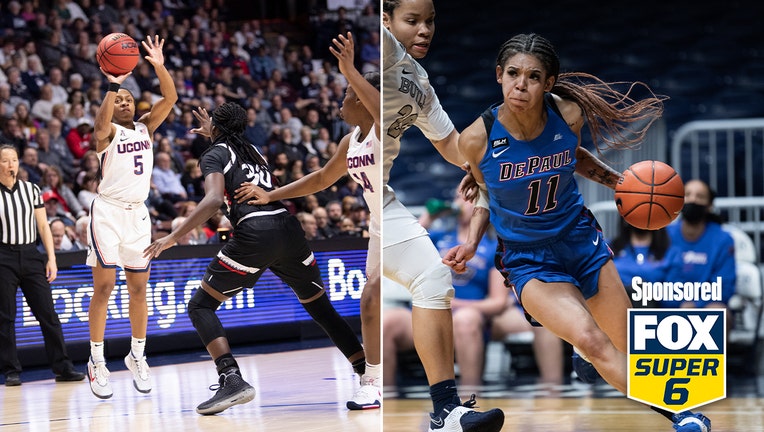 When Connecticut returned to the Big East this year, it was like reuniting with old friends who has been away too long.
For those in the women’s basketball community, however, it was bringing the biggest name in the sport back for another round to contend – another target to aim for.

The Huskies are the standard that teams like DePaul now will have to strive to meet. And on Sunday, the two will meet at McGrath-Phillips Arena in Chicago (1 p.m., FOX) in a battle of Top 25 teams.

Connecticut is coming off its first loss of the year, a 90-87 non-conference loss to No. 19 Arkansas on Thursday night that was highlighted by Chelsea Dungee’s 37 point performance.

And you could win right along with it with FOX Super 6. Just download the Super 6 app, predict the right answers to the six questions on this game and you could win $1,000. It’s that simple:

Which team will score the first points of the second half?
UConn or DePaul

UConn traditionally comes out of the gate strong in the third quarter, outscoring their opponents by a 251-158 margin. DePaul has a 250-240 edge in its 12 games so far this season.

The Huskies have shot 52.5 percent from the field and 55 percent on Thursday night in the loss to Arkansas. So this number traditionally has gone high.

The Huskies have shot 36 percent from beyond the 3-point line this season. On Thursday night, the Huskies hit on 12 of 23 3-pointers (52.2 percent) from the floor. Evina Westbrook hit five three pointers in the game against Arkansas.

The Blue Devils are shooting 32.9 percent from 3-point land through 12 games this season. The leading 3-point threat for DePaul is Sonya Morris, who has hit 27 3-pointers and shot 40.3 percent from beyond the arc this year.

UConn can score in bunches as Thursday night showed. The Huskies average 85.3 points per game scored. Up until Thursday, nobody had broken 65 points against them and their defensive average is 52.3 points. DePaul averages 85.3 as well, but yields 76.7 points a night.