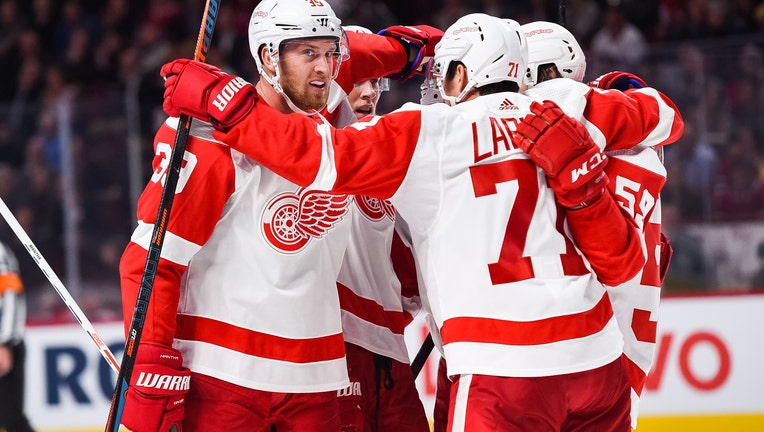 MONTREAL - Anthony Mantha scored his sixth goal of the season and the Detroit Red Wings snapped a nine-game losing streak against Montreal, spoiling the Canadiens' home opener 4-2 on Thursday night.

Darren Helm, Tyler Bertuzzi and Luke Glendenning also scored for the Red Wings, who have three wins in four games this season.

Defenseman Danny Dekeyser had two assists and Jonathan Bernier made 33 saves on 35 shots.

Joel Armia and Max Domi scored for the Canadiens, who were playing the second game of a back-to-back following a 5-4 overtime loss in Buffalo. Carey Price stopped 30 of 33 shots.

Detroit had not won in regulation time in Montreal since 2007.

With the score tied 2-2 in the second period, Mantha scored the eventual winner on the power play at 15:38.

Helm nearly doubled Detroit's lead with three minutes left in the game, but Price stopped him on the breakaway. Glendenning put the contest away with an empty-net goal with 58 seconds remaining.

The Canadiens struggled to clear their own crease for much of the game and it cost them.

Helm opened the scoring with his first goal of the season at 13:33 of the first. After Price misplayed the puck behind his net, Helm scored on a rebound to give Detroit the lead.

A faceoff win by Phillip Danault in the offensive zone led to Armia's equalizer with 53 seconds left in the period. The Finnish winger has three goals in his last two games.

The Red Wings regained the lead 30 seconds later when Bertuzzi scored his third of the year on a nice feed from Dylan Larkin behind the red line.

Mantha and Bertuzzi have combined for 10 of Detroit's 14 goals this season.

The teams traded power-play goals in the second period.

The Canadiens tied the score at 4:34 when Jeff Petry's shot bounced off the end boards, back over the net and into the crease where Domi batted it in. Mantha scored with the man advantage 11 minutes later.

NOTES: Jonathan Drouin registered one point in all four games this season. ... It was the first of a four-game homestand for the Canadiens. ... Montreal defensemen Cale Fleur and Brett Kulak were healthy scratches.

Red Wings: Home against the Toronto Maple Leafs on Saturday.

Canadiens: Home against the St. Louis Blues on Saturday.