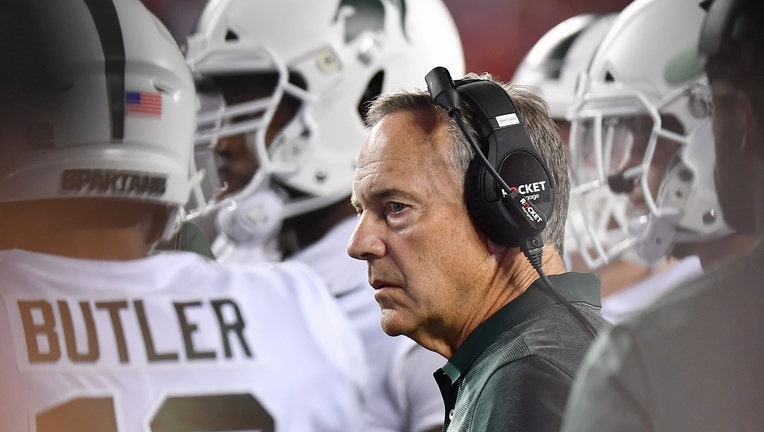 EAST LANSING, Mich. - For Michigan State, the speed of Ohio State is followed up this week by the strength of Wisconsin.

The Spartans, who are playing back-to-back road games against Associated Press top-10 teams for the first time since 1990, are in Madison on Saturday for the No. 8 Badgers.

The Michigan State defense will need to contain running back Jonathan Taylor, a Heisman Trophy candidate who has a streak of 10 straight 100-yard rushing games.

"It's in the notes every year: They are who they are, they're going to do exactly what you see on tape," Tressel said. "It's a little bit like old school: Pro, NFL, Packers, it's going to be 40 degrees, snow in the morning I heard. It's going to be old school football, which is sort of Spartan football, right?"

The Spartans lost 34-10 to No. 3 Ohio State on Saturday as big plays blew open the game in the second quarter. The Buckeyes had two scoring plays of 60 yards or more during a 24-point quarter.

"You can't just punch the ball out," Michigan State coach Mark Dantonio said. "You have to wrap, tackle the guy."

The Spartans should have plenty of chances to tackle Taylor, the nation's leading scorer with 16 touchdowns and second-leading rusher at 149.0 yards per game for Wisconsin (5-0, 2-0).

Despite Dobbins rushing for 172 yards to lead Ohio State's 323-yard output on the ground, Michigan State remains one of the nation's top run defenses (21st in FBS) after leading the country last year.

"They're sick," Tressel said of the Spartans' defensive players. "I'm sick. That's not what we do and we're upset about it. Probably there's a lot to be said that people are trying to do too much.

"It is a different type of attack," Dantonio said. "(Taylor is) an outstanding running back. Not sure who is better, (Dobbins) or him, but both very, very good running backs."

Michigan State defensive tackle Raequan Williams, who had a career-high eight tackles against Ohio State, said he has no preference on the blocking scheme he faces.

"I just like playing the run," Williams said. "Keep running it, I can get a lot of action."

The Badgers have outscored teams by an average of 37.6 points per game, with Northwestern the only team to finish within 20 points of them. Dantonio pointed out Northwestern kept Wisconsin to 130 rushing yards.

"I think that's where it's got to start," Dantonio said. "You've got to be able to stop the run against these guys."

Michigan State's own rushing attack suffered a blow Tuesday, as the school confirmed running back La'Darius Jefferson has entered the transfer portal.

Jefferson, a sophomore, was the second running back to enter the portal this season, joining junior Connor Heyward.

Jefferson rushed for 255 yards and two touchdowns last season and accumulated 25 yards on 19 attempts with two scores this season.