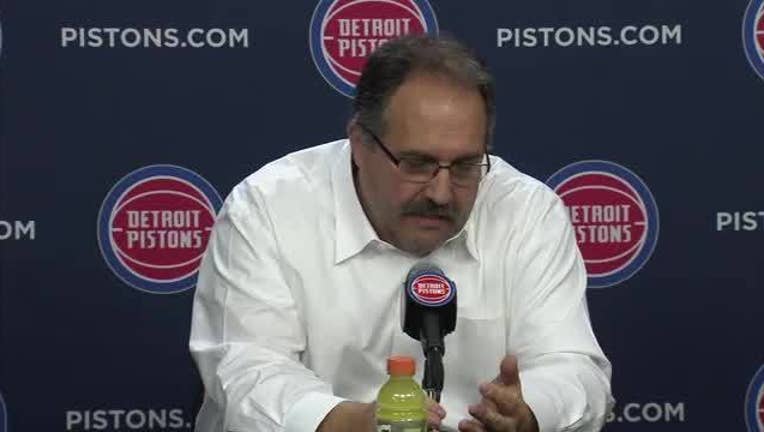 The Washington Wizards just made more of their open shots.

Wall and the Wizards scored 45 points in the third, and although most of their 20-point lead slipped away in the fourth, they were able to hold on for a 122-112 victory over the Detroit Pistons on Friday night. Bradley Beal and Kelly Oubre Jr. had 26 points each, and Wall added 16 points and 11 assists.

The Pistons trailed 83-63 in the third, but the deficit was down to four in the fourth when Wall made a big 3-pointer to put the Wizards up 107-100. Oubre added a four-point play a short while later to push Washington's lead to nine.

Andre Drummond had 14 points, 21 rebounds and eight assists for the Pistons, who have lost four straight.

Both teams were struggling coming into the game. The Wizards lost by 24 at Charlotte on Wednesday, and they fell behind by 15 in the first quarter at Detroit. It was tied at 46 at halftime, though.

"Our guys coming off the bench to start the second quarter just were not ready for the pressure that their bench guys brought," Pistons coach Stan Van Gundy said. "The third quarter I really don't know what the problem was."

Washington dominated the third. Beal scored 13 points in the period and Wall, who was scoreless in the first half, added 10.

"John is one of the best players in the league," Wizards coach Scott Brooks said. "He competes. He's been banged up at times and I love his warrior mentality. He's not going to tell the world that he's banged up, he's just going to go out there and compete for his team."

Wizards: Beal scored at least 20 points for the 35th time this season. No guard in the Eastern Conference has done it more often. ... Oubre set a career high in scoring. His previous mark was 22 points earlier this season.

Pistons: Drummond had 14 rebounds in the first half and played almost the entire second before fouling out.

Detroit forward Jon Leuer told the Detroit News earlier Friday that he had decided to have season-ending ankle surgery.

"He's tried everything to get back," Van Gundy said before the game. "Did not want to go to the route of anything season-ending, right up to the very last day earlier this week. He gave it everything he could to try to get back."

The 6-foot-10 Leuer has played in only eight games this season.

The 76-point second half was the highest-scoring half of the season for the Wizards. They had 73 in the second at Philadelphia on Nov. 29.

"The way we just got whooped the other day, we definitely wanted to come back and get a win," Wall said. "We're a team that's just got to find some consistency on both ends of the floor."