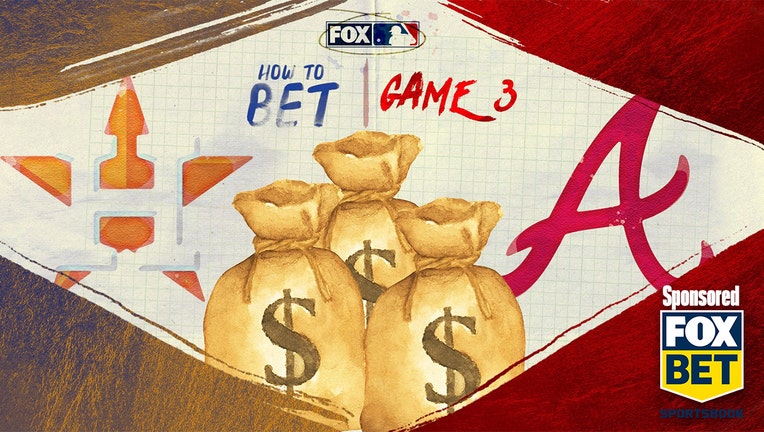 Coming off a much-needed off day, we are back at it tonight with Game 3 of the World Series!  Some might say the Happiest Place on Earth is Disneyland, but for us baseball fans, it will be in the ATL at Truist Park.

Let's have some more fun and see what we can come up with for this evening. Here's what you need to know about all the World Series odds for Game 3 between the Houston Astros and Atlanta Braves, from the lines to my picks (with all odds via FOX Bet).

We got the split we needed in Houston to get us closer to having this be a six or seven game series.  As a baseball fan, more baseball is always good — more games, more opportunities and yes, more baseball drama.

Game 3 is a pivotal one in a series, and the line is telling us that it is basically a pick 'em. The -118 price on the Braves works for me much better than the -1 at +130 because if it is a one-run game, the moneyline is a winner instead of a push.

You will have people tell you all over that you shouldn't "lay juice" or you should "take the plus money" when you can, but that is not always the case. I think the Braves win, and I am OK with laying the short money line.

2. The series has shifted to Atlanta, of course, which probably plays a part in the Braves being favored tonight. ... or does it? How important is home-field advantage in the World Series from your perspective as an oddsmaker and as a bettor?

Home-field advantage matters less and less in the books' and oddsmakers' eyes, but it is a talking point for the media and the bettors. I think it varies from sport to sport, so I look at it only in how being at home affects the game on the field.

In football, the crowd makes it hard to hear the play calls. In hockey, the last line-change is big. In baseball? They literally play by different rules in the different leagues. The biggest games on the biggest stage to decide the champ, and THE RULES ARE DIFFERENT? Hard to believe, but true.

No DH for the Astros is a big deal and a positive for the Bra-vos.  Plus, it might mean a move to the bullpen sooner, and if that happens, that favors the Braves and the over.

3. The people have been digging our "most fun" bet of the night – especially since we've hit on one in both Games 1 and 2 so far! So, what are we doing for fun in Game 3?!

Baseball is fun, and cashing fun baseball bets is even more fun. We have been seeing it right and getting our pitch so far, so let's look fastball and take a big daddy hack.

After sitting in the books for two decades and being a baseball fan, I have parlayed this combination into knowing a little bit here and there. Sitting and running the in-game lines taught me so much about the game, the numbers and, like an old school scout combining the analytics, I have come up with this cockamamie idea:

The fifth and sixth innings are historically the highest-scoring innings in the modern game, as that is usually the third time through the order for the starting pitcher. In the NL parks, the managers are reluctant to take the starters out before the fifth, and they love it if they can get them to the sixth. Tonight's fun bet will be a two-parter. The highest-scoring inning to be the fifth at +875 and the sixth at +850.

It will be a helluva sweat rooting for one or no runs in the other innings and a crooked number in one of those two!

4. Eight runs scored in Game 1. Under. Nine runs in Game 2. Push. It's like the over/under gods are teasing us. Are we finally going over (8.5) tonight?

Sometimes, the books get it right, and my oddsmaker brethren have outdone themselves back to back with the totals. Hat tip to all, and it shows us all the importance of getting the best number.

I like the move back down to 8.5 in the NL park with no DHs for either lineup. I think Ian Anderson is capable of pitching a gem, but I am not as sure about Luis Garcia. His "rock the baby" and "Texas two-step" wind up and delivery had the Red Sox waltzing back to the dugout in Game 6 of the ALCS, but man, I think the lefties on the Braves are gonna eat tonight (hopefully in the fifth and sixth innings!).

It's gonna be a sweat, but let's root for over 8.5. And if you like the Braves, there is a bet that is called "Will the Match be Decided" and the Top of the 9th is +120.  Check the house rules, but that seems to mean to me that if the Braves are winning and the game ends in the 9th (no extras), we get to the window. (Ed. note: Can confirm.)

In this case, plus money is good!

5. Checking in on our World Series MVP bets, Yuli Gurriel has moved from +2500 when we bet on him before the series to +1400, which is neat. Our other three wagers (Alex Bregman, Freddie Freeman and Austin Riley) aren't necessarily doing as well, though. With at least three more games ahead of us, is there a longshot MVP bet we can make and root for heading into tonight?

I told you before that these MVP markets are so hard because we are all watching, yet we could all see something different, and then, the people voting could do something even more different. How do you handicap what a baseball media person will vote?

Who knows, but I know we can swing for the fences here and have some more fun. I didn't think a pitcher would win the award before the series started, and I am not sold that is not true. But, what if Mr. Anderson twirls a masterpiece tonight, and clinches this thing in a Game 6 with another one? Stranger things have happened, and at an absurd +15000, you will remember him and me forever.

If that one is too much of a reach, what about Travis D'Arnaud at +3500? It's not a catcher's award, but if he runs into a couple more fastballs, they might have to give it to him if the Braves win it all.

Get your popcorn, peanuts and Halloween candy ready for baseball, bruh!