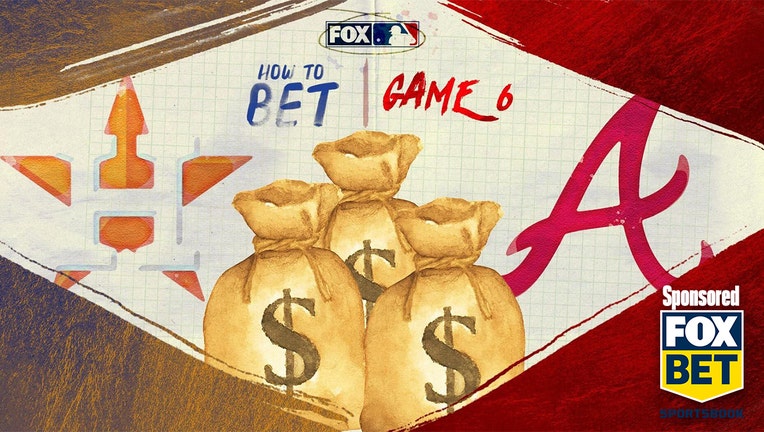 OK, so we made it back to Houston without a problem. Even a first-inning grand slam couldn't stop us! Instead, we had a first-inning "Yerfy," a Houston "dub" and we have a Game 6! Sunday really was one of those "we had it all the way" wins that gave us even more baseball, bruh!

Here's what you need to know about all the World Series odds for Game 6 between the Atlanta Braves and Houston Astros, from the lines to my picks (with all odds via FOX Bet).

Run line: Astros -1 (Astros favored to win by more than 1 run; if the Astros win by 1 run, the bet is a "Push"; if the Braves win by any margin, they cover)

1. We're one day away from two of the most magical words in sports: Game 7. But to get there, we'll need an Astros win in Game 6. Who you got tonight?

We have been on the right side in four of the five games in this Series. In the book, when it gets to the playoffs and then the final series, we always rooted for more action and another game to get to game 7. (At least I did, even if my bosses did not.)

Tonight is no different. The Astros' bats finally woke up in Game 5, and I liked what I saw. Alex Bregman even got involved, along with Jose Altuve and Carlos Correa, and tonight, they get to see lefty Max Fried again.

More Hits in H-Town tonight for the 'Stros means we got Houston in Game 6, even at a pricey -138.

2. Should we talk about that Game 5 offensive explosion? It was enough for FOX Bet to post tonight's over/under at 9 instead of the 8.5 we've seen for most of this series — although that number is now back down to 8.5, with the "Over" at -120. Was Sunday the start of a new trend, or are we going back to the "Under" well in Game 6?

The number had to be adjusted for the total as the series goes back to the AL park. No more pitchers hitting, add the DH back in both lineups and a couple starters throwing that the hitters just saw a few days ago.

We went over the total in the first two games in Houston and got a win and a push. The oddsmakers rinse and repeat throwing up the 8.5 but make us pay a little extra at -120 to go over.

You know the saying "you get what you pay for?" I am in with Houston for the side, and I think if they are going to win, it's because they are going to hit. If you are worried about the price or the Bra-vos hitting, play the Astros' team total Over 4.5.

My daughter Kelsey, aka Middle Consig, famously said to me, "Doubles and bombs, bruh!" years ago when I asked her for her plan at the plate. Hey Dusty, tell the boys the same thing tonight!

PICK: OVER 8.5 runs scored by both teams combined

PICK: OVER 4.5 runs scored by the Astros

3. Let's say someone missed out on our "Astros to win the World Series" bet before Game 5. (Shame, really.) And let's assume that if Houston wins Game 6, the Astros will be favorites in Game 7. Seems reasonable, right? So, if I want to jump on the Houston bandwagon now, do I take the World Series future price (+180) or bet the moneyline in both games?

Even when you know what pitch is coming, sometimes you swing and miss. It happens. Houston to win the Series +400 before Game 5 was on a tee, but we got caught looking. We get back in the box and get another swing.

These Game 6 playoff situations don't come along very often. If you like Houston tonight, and you want to have a money making opportunity in Game 7, then yes, you can play it at +180. If Houston wins, you can play the Braves at a small plus price maybe, depending on the pitcher, of course.

If you want to gamble, you can play Houston tonight on the moneyline and roll it over (put the entire ticket on the Astros) in Game 7. I told you last time that there are math guys that can help more with that strategy, but it's an option. Sit dead red and swing from your heels!

4. We just can't quit these "fun" prop bets. Honestly, they've been one of the highlights of the postseason. What adventure are we going on tonight?

Baseball is fun, and these prop bets have been a blast! All we need is a fancy handshake to celebrate when we get there. Can you imagine doing that at the counter in-person when you go to collect? Who is with me?

Gilligan's Island was a three-hour tour (kids, Google it; Mary Anne -220 vs Ginger), and we are gonna give you three bet to keep you interested and awake all the way to the end.

First, we are Houston-heavy, but there are two teams, and I like the prop of Michael Brantley and Austin Riley to get 1+ hits tonight at -110. Second, I can't decide which one I like more, so you get both Brantley and Carlos Correa to get 2+hits, both at +200. They should be in the two- and three-holes, each getting four or more at-bats, and plus money makes them both worth a play.

Lastly, there is a bet that was a no-sweat in Game 5 that I left in the dugout, but I have to go back to tonight: Team to Win the Most Innings with Houston at +110. We can root for goose eggs in the top half and crooked numbers in the bottom half "All Night Long" (shout out to Lionel Richie).

My friends, the time has come to raise the roof and have some fun!

5. Once again, we're faced with possibly our last night of betting baseball in 2021. If you could only make one wager tonight, what would it be?

Man, the finality of the 2021 baseball season has set in. We have all of these bets, and you want one? Feels like I am staring out at JR Richard, down 0-2, looking for heat and worried about the deuce!

I mean, I could go World Series Correct Score Atlanta 4-3 +290, but who is looking for a knuckleball in this spot?

Or maybe an MVP play on an Astro to have if they win like Altuve, Brantley or Correa, the only guys I think can win it at this point?

I think we have to clear the mechanism, take a deep breath and look for one pitch. It's Houston to win on the moneyline or, if you are really feeling it, Houston -1 (+105) on the run line. Just accept the push if it happens.