DETROIT - Mika Zibanejad scored twice in his 700th career game as the New York Rangers snapped a three-game skid by pulling away to an 8-2 victory over the Detroit Red Wings on Thursday night.

Adam Fox had the go-ahead goal and two assists for the Rangers, who scored six unanswered goals in the third period to avenge a 3-2 overtime loss to Detroit at home Sunday.

Chris Kreider extended his point streak to a career-best seven games with a second-period goal and an assist. 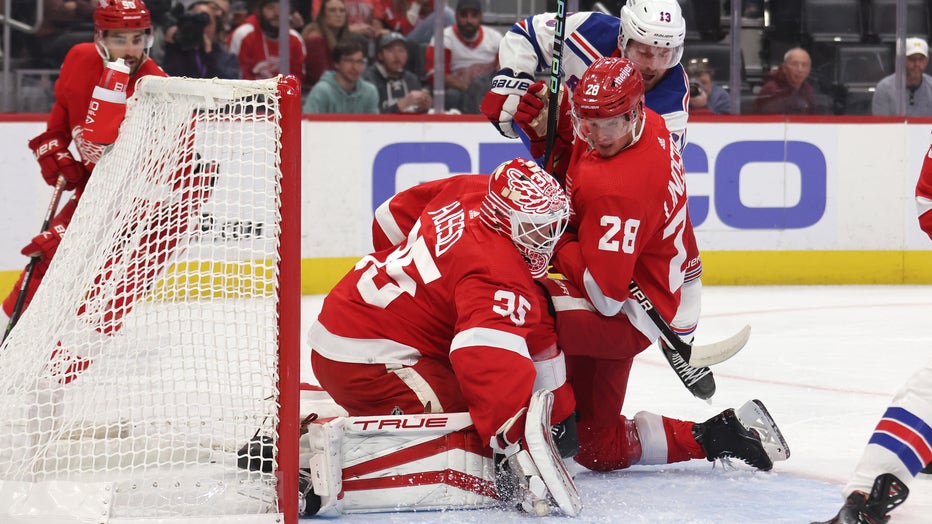 DETROIT, MICHIGAN - NOVEMBER 10: Ville Husso #35 of the Detroit Red Wings makes a first period save on a shot by Alexis Lafrenière #13 of the New York Rangers at Little Caesars Arena on November 10, 2022 in Detroit, Michigan. (Photo by Gregory Shamus

Joe Veleno and Lucas Raymond scored for the Red Wings (7-4-3), and Ville Husso stopped 25 shots. Jonatan Berggren added an assist in his NHL debut after being called up from the American Hockey League's Grand Rapids Griffins earlier in the day.

Zibanejad scored off Fox's feed with 4:20 left in the first period. Veleno answered later in the period with a shot from the slot off Berggren's pass.

A Rangers turnover in their own zone led to Raymond's sixth goal, a one-timer from the slot set up by Dylan Larkin.

Kreider scored in front on a power play to tie it at 2 with nine minutes left in the second.

Fox scored from the point with 13:58 remaining, beating Husso on the stick side. Goodrow scored on a backhand a minute later for a 4-2 lead. Goals by Zibanejad, his team-high ninth, and Gauthier soon followed.

NOTES: Detroit forward Oskar Sundqvist returned after missing seven games with an upper-body injury. ... Rangers F Artemi Panarin, who had two assists, has 28 points in 18 career games against the Red Wings. ... The Rangers have earned at least one point in eight straight games against Detroit (6-0-2). ... Zibanejad made his NHL debut in Detroit on Oct. 7, 2011, with Ottawa.