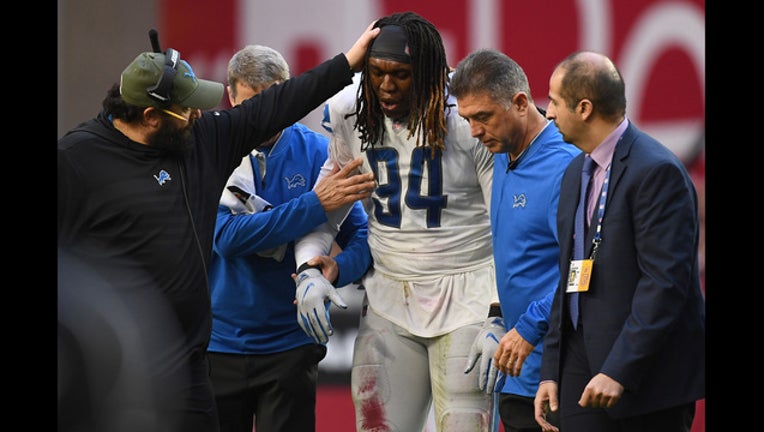 GLENDALE, ARIZONA - DECEMBER 09: Head coach Matt Patricia of the Detroit Lions checks on Ezekiel Ansah #94 after he was injured on a play in the first half of the NFL game against the Arizona Cardinals. (Photo by Jennifer Stewart/Getty Images)

ALLEN PARK, Mich. (WJBK) - The Detroit Lions announced Tuesday that defensive end Ziggy Ansah has been placed on reserve-injured is out for the season with a shoulder injury.

Ansah, 29, is playing on the franchise tag and signed a one-year for a little over 17 million dollar deal last offseason.  The veteran was limited by injuries all season and had four sacks in seven games.  If his time in Detroit is done, he would've played in 80 regular season games for the Lions while forcing 10 fumbles and sacking the quarterback 48 times over six seasons.

Second-year tight end Michael Roberts was also placed on reserve-injured with a shoulder injury and will miss the rest of the season.

Roberts, 24, had three touchdowns on nine receptions in eight games this season.