An approaching system brings the threat of snow to the area this weekend, about 1" to 3". Meteorologist Lori Pinson has your forecast.

DETROIT (FOX 2) - Well, it was bound to happen and here it is: Saturday, Nov. 27 will bring our first chance at measurable snowfall in Metro Detroit with up to 2 inches of snow expected by the end of the day on Saturday.

After Friday's cloudy, breezy, and cold day saw some flurries, we'll see the real deal on Saturday as highs will barely get above freezing.

We start off the weekend with below-average temperatures and morning readings near 19 for a wind chill.

We'll max out at 35 degrees as a high and Saturday afternoon and evening. A low-pressure system will move in and we'll get periods of light snow accumulating between 1 and 2 inches in Metro Detroit.

The farther north you live, the more likely you are to see more snow. Pontiac should expect 2 inches while Port Huron could get close to 3. Meanwhile, on the south side of the Metro, Monroe will get less than an inch. 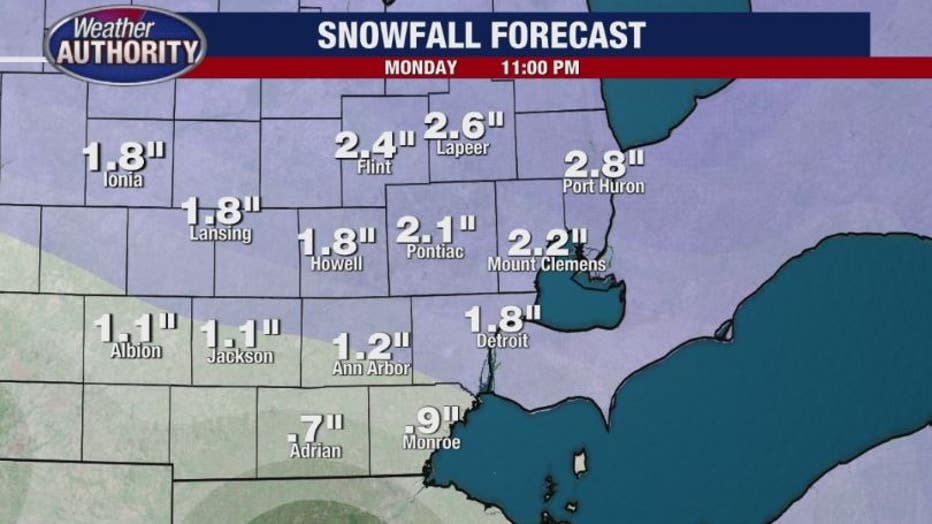 Snowfall totals will be between 1 and 3 inches over the two days. High temperatures remain consistently low, in the mid 30s.

While that won't be much of a problem for most of us in Michigan, it will make the roads a bit slippery on Sunday morning.

By Monday, as the low moves east, a chance for a little wraparound moisture bringing snow showers early. High 38, low 29.

Tuesday, decreasing clouds and windy with highs near 40 and lows down to 28.

Wednesday will be similar with temperatures near 40 but windy and dropping down to 32.

Thursday will be windy and cloudy early, with highs near 44 and a low of 35.

Friday? Still windy but dry with a high of 39.