The Wednesday warm up is here!

But it comes with rain and some wind. A Wind Advisory goes into effect tonight.

DETROIT (FOX 2) - Brace yourselves. Strong winds are back in southeast Michigan and a wind advisory has been issued for all of Southeast Michigan beginning at 10PM Wednesday night through 4 PM Thursday afternoon.  At its peak the gusts could reach 50 mph.

Following a similar pattern to the extremely strong storms that brought deadly tornadoes to Kentucky, Illinois, and Arkansas - a low pressure area is quickly ejecting and strengthening out of Colorado.

Get the FOX 2 apps on your phone now for the most important news and weather alerts sent directly to you.

The system is screaming across the Great Plains as it adds instability and moisture from the Gulf South. A collision of cold air will spike in Iowa, Minnesota, and parts of eastern Nebraska resulting in more strong, potentially deadly tornadoes to develop. These tornadoes will not travel far enough east to Michigan, but the winds will. 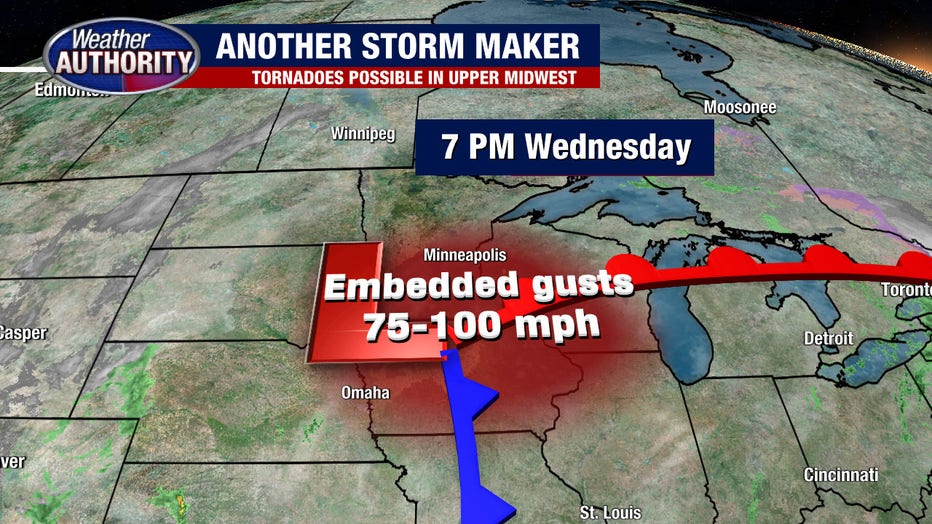 Winds will begin to increase in intensity throughout the day Wednesday but beginning before midnight we'll see gusts near 35 mph. Between 3 a.m. and 2 p.m. the gusts could blow as strong as 50 mph with sustained recordings between 20-30 mph.

Power outages are again possible and anyone with a Thursday morning garbage pickup should be cautious about putting their bins out too early.

The wind will drop off slowly after the Advisory ends; by 8pm it could still be gusting to 25 mph.  As we head into Friday morning, it will drop off entirely.