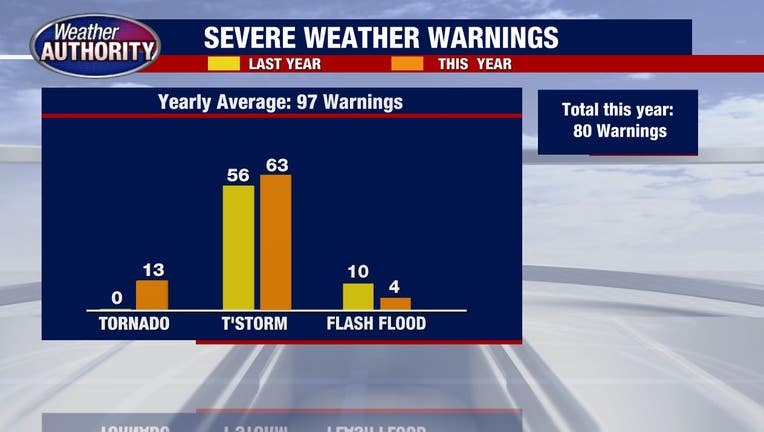 I gotta be honest - I don't remember this many Severe Weather Warnings in a long time.

It seems like every other day we are talking about "the threat of severe weather". We've had to break into programming to warn our viewers about tornado warnings way more than we had to in the past.

Or so it feels like. But you know me - I don't deal with "Feels like". I need facts. Cold hard facts. So I found them.

Since June 1, we've had 80 different severe weather warnings in Southeast Michigan. Thirteen of those have been tornado warnings, 63 have been severe thunderstorm warnings, and four have been flash flood warnings.

It seems like a lot because it is a lot! On average, we typically get 97 severe weather warnings per year. We've had 83% of that and it's only August!

While we did have more flash flooding in 2020 thanks to higher river/lake levels, we had zero tornado warnings and 56 Severe Thunderstorm Warnings by this time - significantly less.

I dug further though. By this time in 2019, we had zero tornado warnings, 42 severe thunderstorm warnings and two flash flood warnings.

Similarly, in 2018 the numbers were three tornado warnings, only 11 severe thunderstorm warnings, and one flash flood warning. Comparing those to this year (to repeat: 13 Tornado/63 Thunderstorm/4 Flash Flood) it's not even close!

To find the last summer we had with this many severe weather warnings, I had to really dig through the data. I found it though: 2011.

Exactly one decade ago we encountered a similar summer with 80 warnings by this time.  *Sigh*

All I know is we need a break!