The threat of severe weather has dropped slightly in Metro Detroit after heavy rain makers split off into the northeast and southwest sides of Michigan. But Metro Detroit could still see heavy rains between 1-3 inches - a potential problem for morning commuters.

SOUTHFIELD, Mich. (FOX 2) - The threat of heavy storms in Metro Detroit has fallen slightly as the weather systems barreling through Michigan have progressed throughout the morning.

The strongest part of the system followed its most likely path and moved over Southwest Michigan, while another heavy rainmaker moved over the eastern side of the mid-Michigan, near Saginaw.

Even as the systems diverge, Wayne, Washtenaw, Oakland, Macomb, Lenawee, Livingston, and Monroe counties all remain under flash flood watches.

The soonest time Metro Detroiters could start to see rain is between 5 and 8 a.m., with showers and some thunder likely by 6 a.m.

The damaging winds forecasted the night before don't look quite as bad as they did Wednesday night, but localized winds could reach up to 60 mph. Some flooding rains are possible, which commuters should keep an eye on when traveling through Metro Detroit's major highways - specifically its more troubled areas at 94 and 75.

Well, we've had a slight break from severe weather, so I guess it's time to get right back into it right? Here we go again - another strong system is barreling into Michigan and we all should be prepared. The updated time frame expected for the strong storms looks to be from 5 a.m. to 8 a.m.

The National Weather Service placed all of Metro Detroit Detroit under a flash flood watch until 10 a.m. on Thursday. The potential for high winds and power outages are likely while localized flooding is a risk.

The fast-moving storms could bring as much as two inches of rain, impacting rivers and streams.

The timing of the storm is not ideal - which is why you need the FOX 2 Weather and News Apps. We'll be tracking the storm all night long and will send alerts throughout the night - but don't worry. There will be no audio on these alerts unless lives are in danger. So if you find yourself waking up to the severe weather, just tap on the notifications to get the updates. It's free to all iPhone, iPad, and Android users. 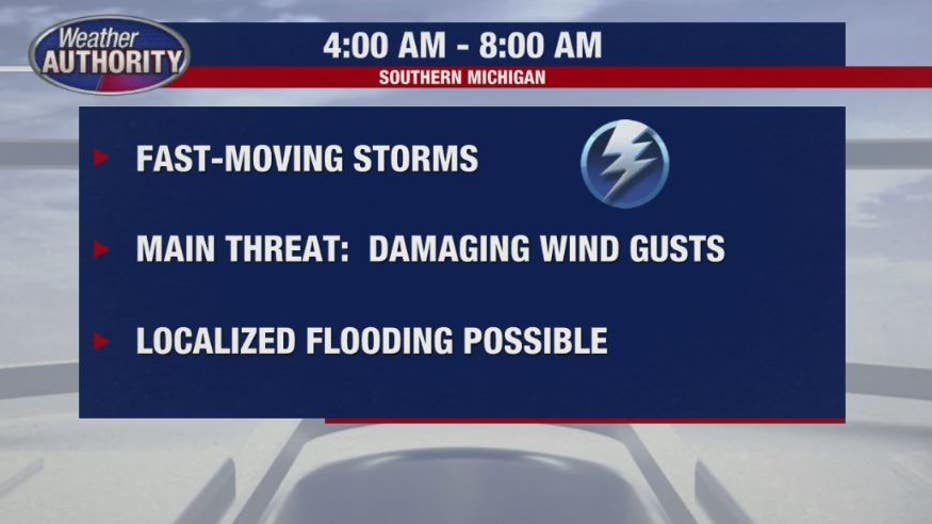 What's the weather threat on Thursday in Michigan?

A chance for significant severe weather is possible very early Thursday morning as storms slam down on us from the Northwest. The storms themselves are developing as we speak in northern Minnesota and will impact that state (and Wisconsin) later in the day on Wednesday.

Thanks to the position of the jet stream, the storms are on a direct highway to Michigan - but the exact position is still in question, as of 2 p.m. Storms tend to ride the jet stream like train tracks, so we're confident of the overall path they'll take, but the end position has a few kinks to work out. 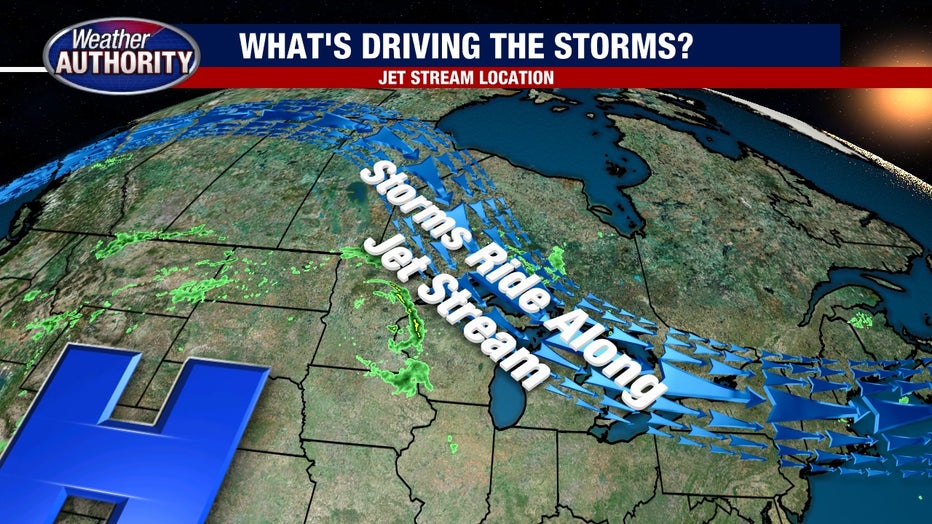 Who is most at risk with Thursday's severe weather?

Models are pretty evenly split on this; about half of them have the storms walloping southwest Michigan, while the others have it moving more towards the southeast side. My big concern has been the trend over the last 24 hours which has shown a more eastern movement of the projected storms.

To me, this indicates that as we get closer and closer to the storms gaining strength, the models are recognizing an eastern shift. 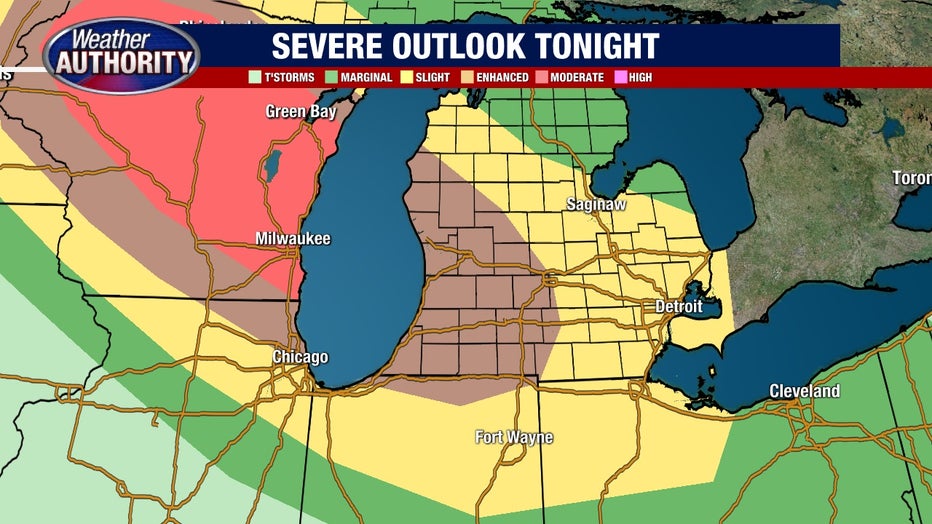 The storms will develop, that we know. So projected path aside, let's discuss the main threats. This storm will pack a major punch when it comes to wind gusts.

Seeing a gust over 60 mph is not out of the question, and if a derecho (strong straight-line wind event) develops there are spots in Wisconsin that could get wind over 70 mph. Combined with a lot of atmospheric moisture heavy downpours are likely too, which may lead to another round of flooding.

Medium hail is likely in the core of this storm too. Needless to say, power outages will be a major concern early Thursday morning. 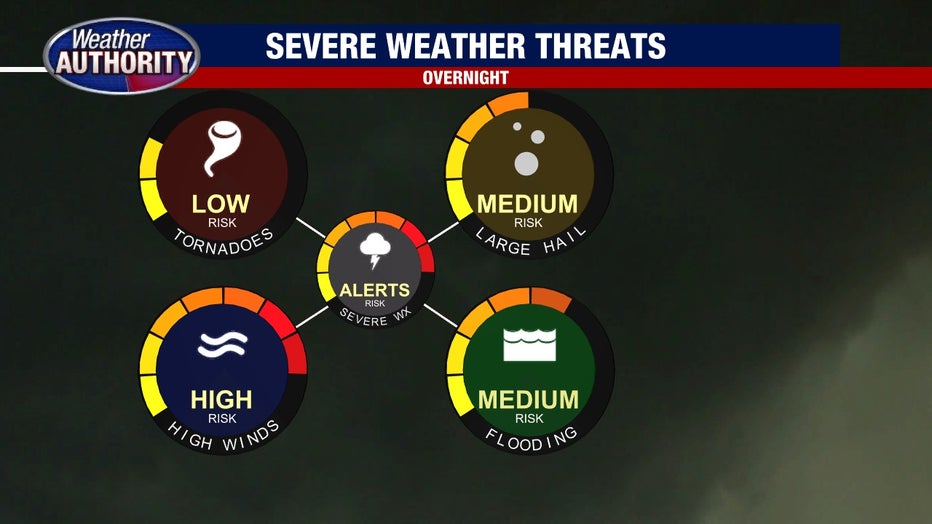 What's the timing of the system?

That leads to the question of timing, which frankly isn't ideal. The storms will accelerate into Northwest Michigan at 1 a.m. in Traverse City and arrive in parts of Central Michigan, specifically Lansing, by about 3 Thursday morning. They will continue to dive from the northwest to the southeast between the hours of 5 and 8 a.m.

The strongest parts of the storm will impact areas at different times, but it looks clear that the commute will be a mess - so be sure to plan accordingly and check in with FOX 2's Kellie Rowe for live traffic reports throughout the morning. 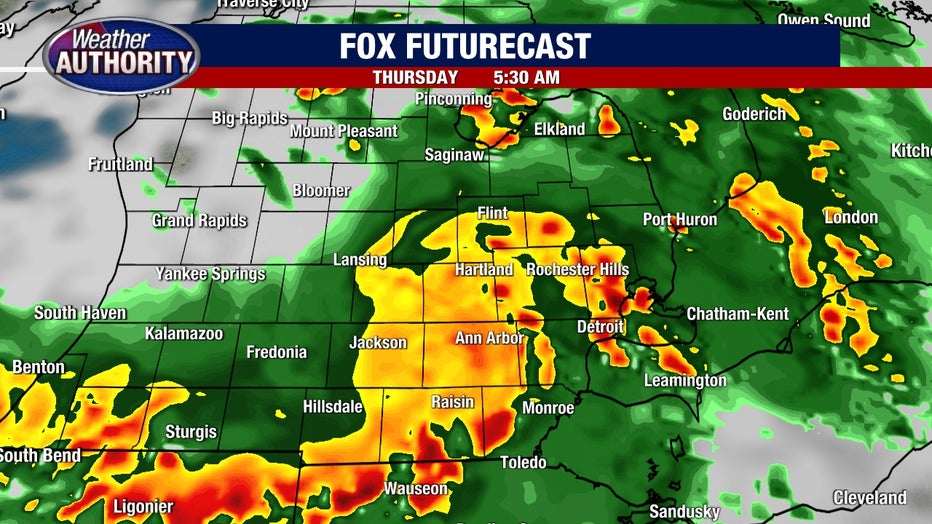 What is unknown about the storm system?

The unknown variable in all of this is of course the track the storms take. While it is still possible that Southwest Michigan gets the brunt of the action, it's a close call that requires us to be ready, especially given the Summer we've had. 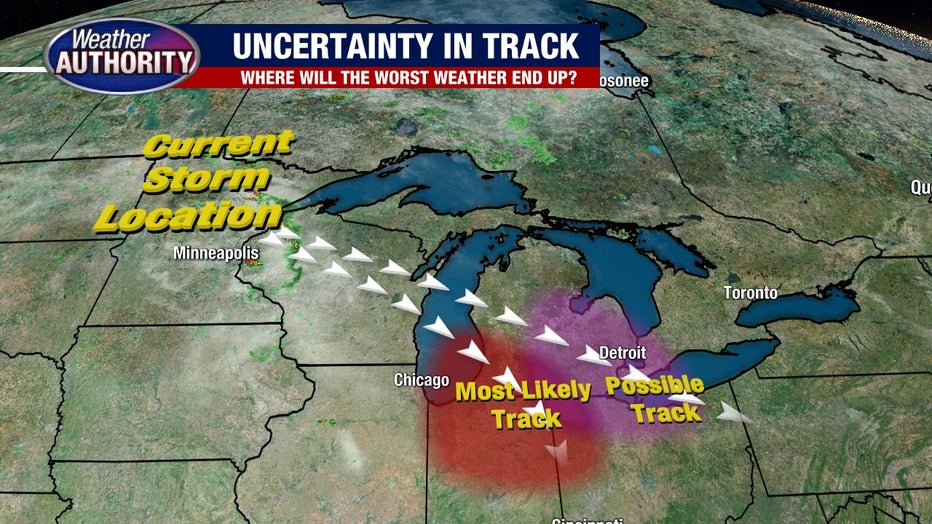