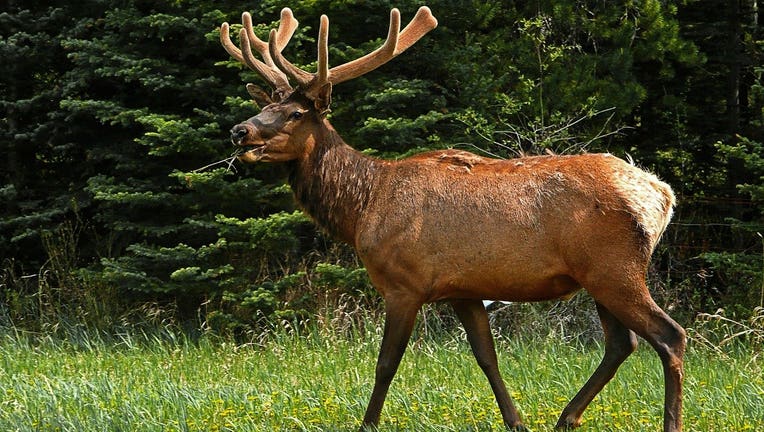 An elk hunting guide called the Department of Natural Resources around 3:30 p.m. to report that 10-12 elk had fallen through ice on Crapo Lake, a 92-acre private lake about 20 miles northeast of Grayling in Otsego County.

The guide said he and another guide and hunting party received permission to hunt on the land after seeing the elk 100 yards from the main road.

"When the hunters arrived, they saw the elk headed down a slope and onto the ice, traveling approximately 75 to 100 yards out onto the ice," said Sgt. Mark Depew of the DNR Law Enforcement Division. "The animals grouped up and broke through the ice."

When DNR conservation officers arrived about 30 minutes after being called, they found the hunting guides in a rowboat trying to create an escape path for the elk with a chainsaw.

Related: How to get your deer tested for chronic wasting disease

"The ice was approximately 5 to 6 inches thick, and the two were making almost no progress," Depew said. "For the safety of the guides, conservation officers ordered them off the ice to prevent another tragedy. Given the weight of the animals and the relatively thin ice, there were no safe options available for saving or recovering the elk alive."

Elk typically weigh 350-900 pounds. The ice was 2 inches thick where the elk fell through into 50-foot deep water.

Lt. Jim Gorno of the DNR Law Enforcement Division said reports are received each winter about deer, moose, and dogs falling through ice. In some cases, people have died trying to save animals.

"We remind people that no ice is safe ice," Gorno said. "Putting yourself in danger of drowning is not an acceptable risk."

"Boats, cables, winches, ropes and ladders were utilized in the recovery effort," Gorno said. "All the elk will be processed by local butchers and processors and the meat donated to local charities and food banks for distribution."

"We’re looking into it to make sure no game hunting violations of any kind occurred," Hagler said.

"This is a very tragic and unfortunate event," said DNR Director Dan Eichinger. "Elk are an important species in Michigan’s successful conservation history. We are indebted to the conservation officers and hunting guides who tried to help in responding to this incident Tuesday afternoon."