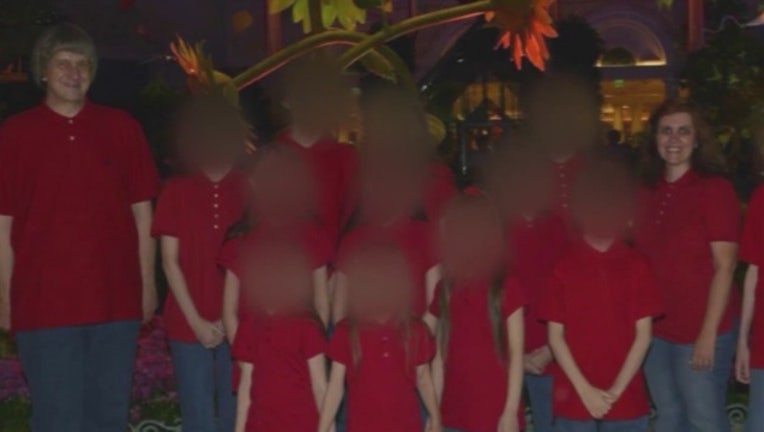 PERRIS, Calif. (AP) - A 17-year-old girl called police after escaping from her family's home where she and her 12 brothers and sisters were locked up in filthy conditions, some so malnourished officers at first believed all were children even though seven are adults.

FOX 2 will be streaming a press conference at 1 p.m., click here to watch.

The girl, who was so small officers initially believed she was only 10, called 911 and was met by police who interviewed her and then went to the family home in Perris, about 70 miles southeast of Los Angeles. They found several children shackled to their beds with chains and padlocks in dark, foul-smelling surroundings, according to the Riverside County Sheriff's Department.

The children, ages 2 to 29, "appeared to be malnourished and very dirty," according to a press release announcing Sunday's arrest of the parents. "The victims were provided with food and beverages after they claimed to be starving."

David Allen Turpin, 57, and Louise Anna Turpin, 49, each were held on $9 million bail and could face charges including torture and child endangerment.

It wasn't immediately known if they had attorneys.

State Department of Education records show the family home has the same address as Sandcastle Day School, where David Turpin is listed as principal. In the 2016-17 school year it had an enrollment of six with one student in each of the fifth, sixth, eighth, ninth, 10th and 12th grades.

Neighbors said they were stunned by the arrests. Andrew Santillan, who lives around the corner, heard about the case from a friend.

"I had no idea this was going on," he told the Press-Enterprise of Riverside. "I didn't know there were kids in the house."

Other neighbors described the family as intensely private.

A few years ago, Robert Perkins said he and his mother saw a few family members constructing a Nativity scene in the Turpins' front yard. Perkins said he complimented them on it.

The Turpins filed for bankruptcy in 2011, stating in court documents they owed between $100,000 and $500,000, The New York Times reported. At that time, Turpin worked as an engineer at Northrop Grumman and earned $140,000 annually and his wife was a homemaker, records showed.

Their bankruptcy lawyer, Ivan Trahan, told the Times he never met the children but the couple "spoke about them highly."

"We remember them as a very nice couple," Trahan said, adding that Louise Turpin told him the family loved Disneyland and visited often.