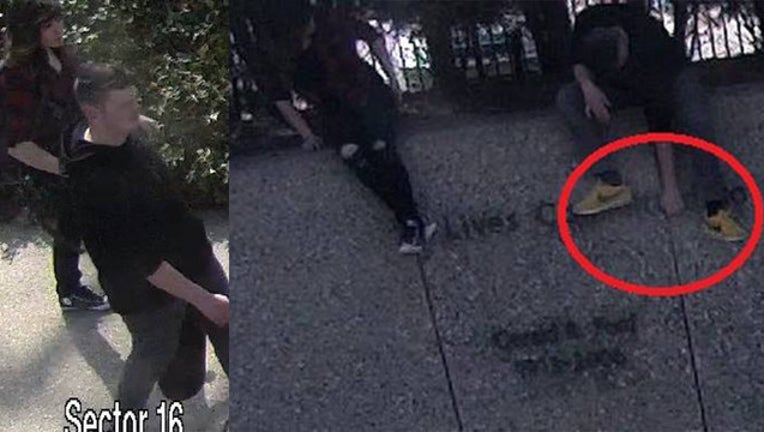 A man and woman who can be seen trying to pry off a letter at the gravesite of former President Gerald Ford and First Lady Betty Ford at the Gerald R. Ford Presidential Library and Museum in Grand Rapids, Michigan. (Grand Rapids Police Department)

Grand Rapids, Michigan, police say the results of the investigation will be forwarded to a prosecutor for review when it is completed.

Police released a photo of a man and a woman sitting on a wall. The man appears to be marking or digging into panels that say, "Lives Committed to God, Country and Love." The woman kicked her skateboard into the panels.

The incident occurred on March 27 around 4 p.m., city officials said.

Surveillance footage shows the man and woman on skateboards as they approach the site and then kicking them before they sit on the wall and appear to pry at the letters.

Police said the suspects were able to take the letter "E" from the word "committed" off the wall. It cost the museum $400 to have it replaced.

The museum hopes the suspects are found, because they see the incident as an extreme act of vandalism.

The Fords are buried outside a museum that is dedicated to Gerald Ford's presidency. He died in 2006. Betty Ford died in 2011.