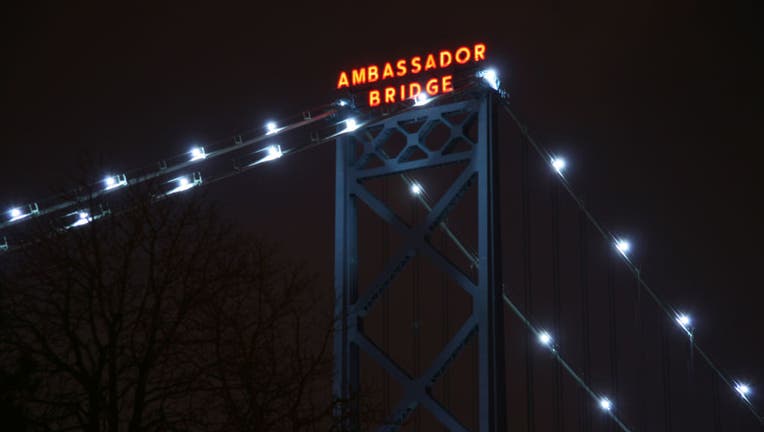 The Ambassador Bridge seen at night over the Detroit River between Detroit, Michigan and Windsor, Ontario, Canada. Windsor-Detroit is the busiest border crossing, with more than 7,000 trucks crossing daily on average. (Photo by Creative Touch Imaging

DETROIT (FOX 2) - An Canadian man originally from India has been charged after the United States Customs and Border Protection (CBP) discovered roughly $2 million in cocaine in his semi-truck as he tried to cross the Ambassador Bridge into Canada.

In a federal complaint released on Wednesday, authorities said Aman Kumar Turan, a citizen of India and Canadian resident, was stopped at the border from Detroit into Canada during an inspection on traffic from the U.S. into Canada. The CBP was conducting the outbound inspections when Turan's truck was selected for inspection.

According to the complaint, CBP officers noticed the seal on the truck was not secured to the door. The complaint says seals are used in the trucking industry and are often required by shippers to be installed and secured on commercial trailers.

The CBP officers said the seal was looped into the latch but was not locked, which would have been done by the driver.

When authorities searched the trailer, they reported finding a white powdery substance that tested positive for cocaine. In total, authorities said there were almost 145 pounds (65 kilograms) of cocaine in the trailer.

In the cab, officers said they found a roll of black bags and a receipt that showed they had been bought at a Travel Centers of America, along with latex gloves.

Truan said he had been a commercial truck driver for six years and on July 10, he admitted to driving from the U.S. through Port Huron, stopping at the Travel Centers of America in Battle Creek, and stayed the night. He also said he bought the bags from the truck stop before going to his destination and dropping off his commercial cargo on July 11 around 8 a.m.

Turan said after dropping off his cargo, he drove two hours to pick up canned tomatoes.

Throughout his interview, which was done after his rights had been read to him, he said that he had secured the doors with the seal after picking up the tomatoes. Despite that, he said another driver told him his trailer doors were open while he was driving on I-75. He stopped to check but said the doors were secured and the seal was locked in place.

Authorities said Turan has made roughly 150 crossings into the U.S. since 2016.

He's been charged with possession with intent to distribute and attempt to export more than 65 kilograms of cocaine.