President Donald Trump participated in a virtual rally on Rush Limbaugh's conservative radio show after nearly a week in quarantine after being diagnosed and treated for symptoms of COVID-19.

LOS ANGELES - The Commission on Presidential Debates has scrapped the second match-up between President Donald Trump and Democratic nominee Joe Biden originally set for next week after the president refused to participate in a virtual debate amid his COVID-19 diagnosis.

The commission confirmed the cancellation of next week’s event, which was scheduled for Oct. 15.

The two remaining debates between Trump and Biden had been thrown into uncertainty Thursday as the rival camps offered dueling proposals for the events that have been upended by the president’s coronavirus infection.

Trump ruled out the possibility of a virtual format for the debate, which prompted Biden to schedule a town hall with ABC News for that night once Trump said he would not participate.

The president has not been seen in public — other than in White House-produced videos — since his return days ago from the military hospital where he received experimental treatments for the virus.

Trump’s team later countered with a call to hold the remaining debates as scheduled once the president’s doctor said he would be cleared to hold public events beginning on Saturday.

But the commission said it would not reverse its decision against having the candidates on stage together, citing an abundance of caution on health concerns — particularly for the town-hall-style debate that was set to feature questions from voters.

The chair of the nonpartisan Commission on Presidential Debates told The Associated Press on Thursday that the final debate, scheduled for Oct. 22, was still slated to go on with both candidates present as planned. 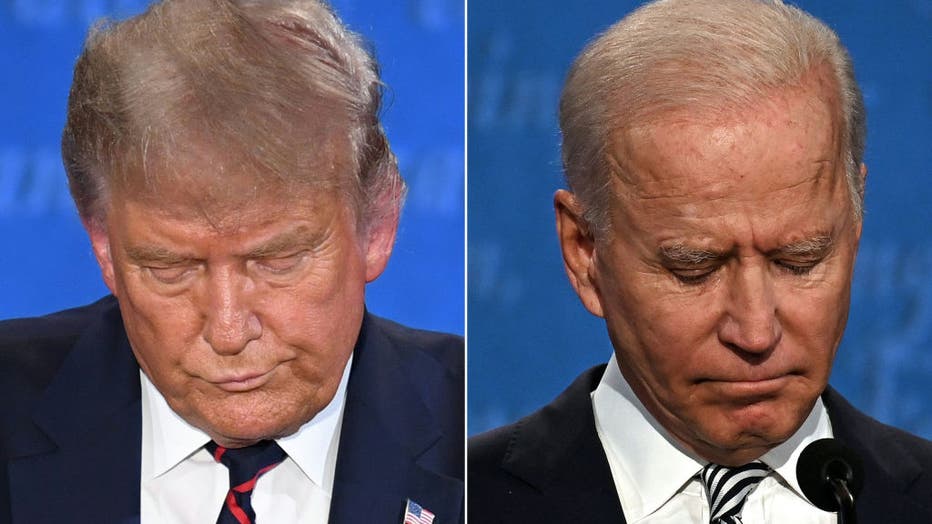 Trump, for his part, appeared to be charging toward a return to the campaign trail in the wake of the back-and-forth over next week’s debate.

Two weeks after his Rose Garden event that has been labeled by Dr. Anthony Fauci a “super-spreader” of the coronavirus, Trump is planning to convene another large crowd outside the White House on Saturday on a law-and-order theme.

More than two dozen people linked to the White House have contracted COVID-19 since the president's Sept. 26 event announcing Judge Amy Coney Barrett as his nominee to the Supreme Court.

Trump will address the group, expected to be at least several hundred supporters, from the White House balcony, according to an official. A person with knowledge of the planning said all attendees must bring masks or will be provided with one, and also will be given temperature checks and asked to fill out a brief questionnaire. Following CDC guidelines will be strongly encouraged, which include mask-wearing and social distancing.

Fauci, the government’s top infectious disease expert, cautioned the White House again to avoid large-scale gatherings of people without masks. He said of the Supreme Court event in an interview with The Associated Press, “I was not surprised to see a super-spreader event given the circumstances."

Trump is also planning a Monday rally in Sanford, Florida, which was originally scheduled to be held on Oct. 2, the day after he tested positive for the coronavirus.

Trump tweeted on Friday that he would be in Sanford “for a very BIG RALLY!”