DETROIT - Four people were injured, including three Detroit police officers after a T-bone-style crash at an intersection near the I-96 freeway Wednesday morning.

Around 8 a.m., a Detroit Police Department vehicle was struck by another vehicle after it had pulled to the side of the road to assist another unit at the intersection of Schoolcraft and Meyers, just south of Littlefield neighborhood.

Four people were injured, including three Detroit police officers after a traffic accident involving one other vehicle crashing into a squad car that had pulled to the side of the road to assist another department unit. None of the injuries are life-threatening.

Footage of the wreck shows extensive damage to the back of an SUV where the liftgate had been ripped from the vehicle.

All three officers injured were taken to the hospital with non-life-threatening injuries. A fourth person who was in the other vehicle, someone in their late 30's, was also taken to a hospital.

"I'm just thankful it appears everyone's going to be fine from the accident," said DPD Cpt. Michael Chambers. "The officers were out trying to assist a fellow officer. It's just an unfortunate accident and we're just glad that no one was too seriously hurt." 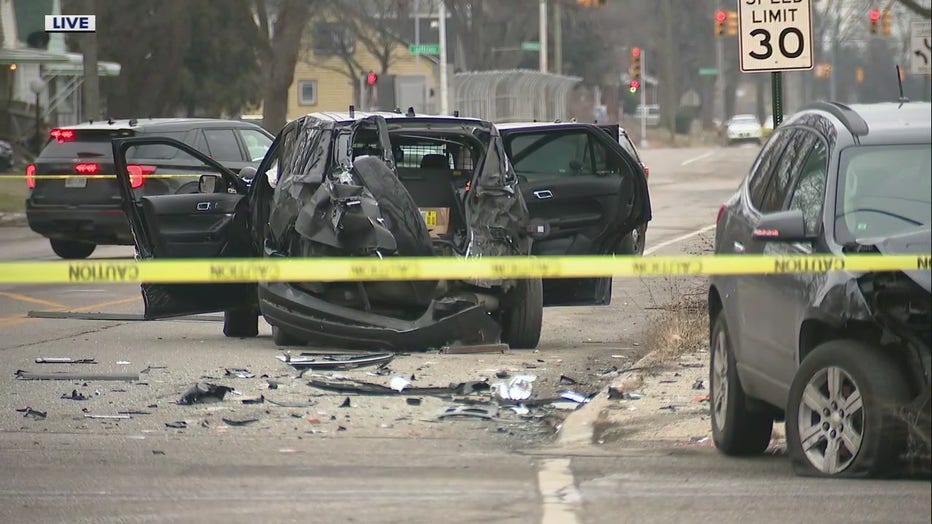 A Detroit police vehicle after a crash Wednesday morning

It's unclear who had the right-of-way or if the officer's lights were on prior to the crash; inquiries that officers are now working to discern as they clear wreckage from the intersection. They'll likely be at the site for hours.

Detroit police declined to provide further information but did say they are reviewing relevant footage.