DEARBORN, Mich. (FOX 2) - President Joe Biden's visit to Dearborn Tuesday was met with protests from the local Muslim community, upset over the current situation in Gaza.

While the President visited Tuesday, nearly 3,000 people were also there in protest.

While the President visited Dearborn Tuesday, nearly 3,000 people were there in protest.

"They need to hear us all the way over in the Rouge Plant they will hear us (chant) ‘Free Palestine,’" said Amer Zahr, protest organizer.

But it was what the president didn't say - during remarks at Ford, opting out of addressing the Palestinian/Israeli conflict among a massive Arab-American population.

"They asked us to save Democracy from Donald Trump and now we are asking everyone to please save Palestine from Joe Biden," said Zahr. "He is participating in, and funding the murder of our families."

"We are marching because we put Joe Biden in office," said protester Shema Aman. "If it wasn't for our turnout in the state he wouldn't be in office."

Protest organizers condemned the president for not taking a harder stance against Israel for what they say are human rights violations, in a volley of bombings lasting more than a week - the worst clash between the sides since 2014. 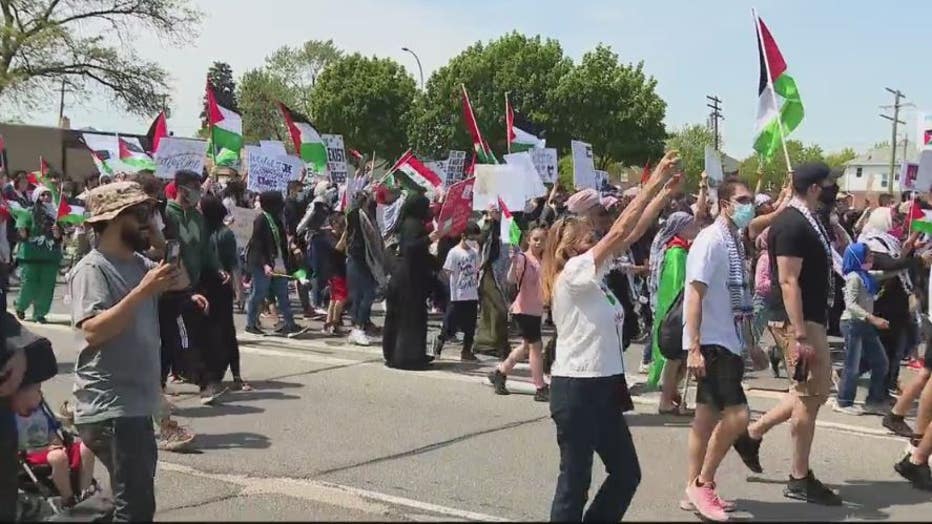 "Over 200 dead, 61 children. families erased off the face of the earth and Israel is not overreacting," said Zahr.

Osama Siblani of the Arab American News told the crowd, he was chosen Monday, to take part in a virtual meeting with the White House. He and about 20 other Arab-American leaders from around the country, he says it was unproductive.

"I am not going to apologize for Hamas firing rockets at Israel," said Siblani to cheers.

President Biden has called for a cease-fire - but that is not good enough for protesters.

"This conflict is not going to end with a ceasefire," Siblani said. "It's going to be pushed back to another time. That's what has been happening for 73 years."

Siblani has called the Jewish population in Michigan their brothers and sisters saying this is not an Israeli situation, but a human rights one.