WARREN, Mich. (FOX 2) - Forty six people were arrested in Warren as part of an ongoing investigation into human trafficking in the city.

We're told 25 women and 21 men were arrested after a sting involving members of the department's special investigations unit. 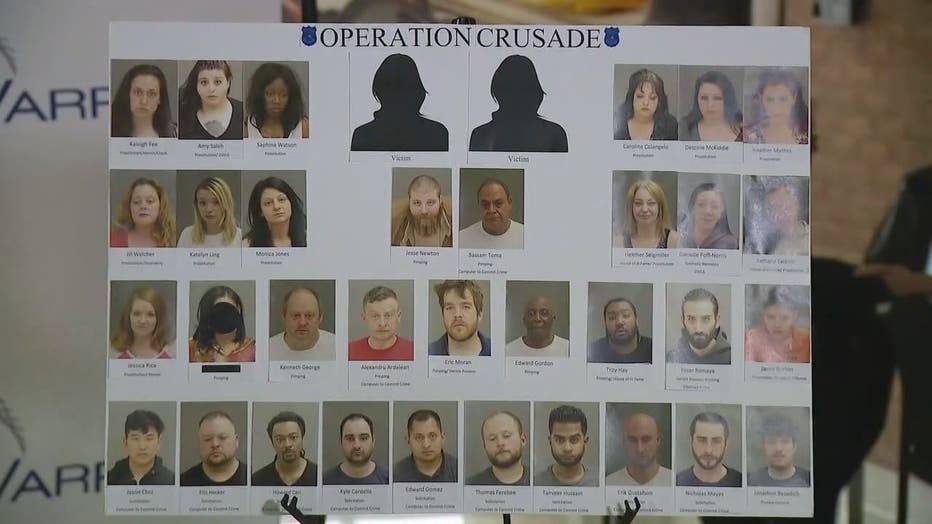 A poster board from the Warren Police news conference Friday with mug shots of some of the 46 suspects who have been arrested and charged in a sex trafficking sting.

Warren police commissioner Bill Dwyer and Mayor Jim Fouts held a press conference Friday morning with details. They say this is part two of a multi-phase investigation. Phase one culminated with 35 arrests back in May.

Mayor Fouts says he often gets calls from residents around the holidays complaining about the hotels in Warren. He says residents complain their family members who are staying in town often witness prostitution or are approached during their stay.

Warren police say they have relationships with various hotels and that they were forthcoming and helpful in the latest undercover operations.

This latest three-day operation resulted in 31 felony charges and 72 misdemeanor charges spread out across the 46 suspects. The charges range from human trafficking to prostitution to pandering and drug charges.

Dwyer says no sex trafficking victims have been identified as of yep with the latest sweep. He said the sweep in May resulted in three victims being rescued and getting help.

We're told some females in the latest sweep are currently facing prostitution charges. We're told if evidence shows they're victims of sex trafficking the charges will be dropped.

Most of the 35 charges from last May have resulted in conviction, with some cases still pending.