A shooting near an Aurora, Colorado high school has left six teens injured and the suspect (s) is still at large. (Credit: KDVR).

AURORA, Colo. - Six teenagers were hospitalized following a shooting at an Aurora, Colorado park Monday afternoon, according to police.

The shooting took place at Nome Park at 12:45 p.m. local time, according to Aurora Police Chief Vanessa Wilson. The park is located about one mile north of Central High School where all six victims are students, according to the chief.

Police set up a secure perimeter around the school following the shooting.

Wilson said three victims who were transported to Aurora Children’s Hospital — which is about a mile away from the crime scene — were treated and have been reunited with their families.

Another two victims were taken to the University of Colorado Hospital next to the children’s hospital and one of the victims was in emergency surgery. The second victim’s condition was not released.

An additional sixth victim, 18, transported themselves to the hospital with minor injuries, according to police. 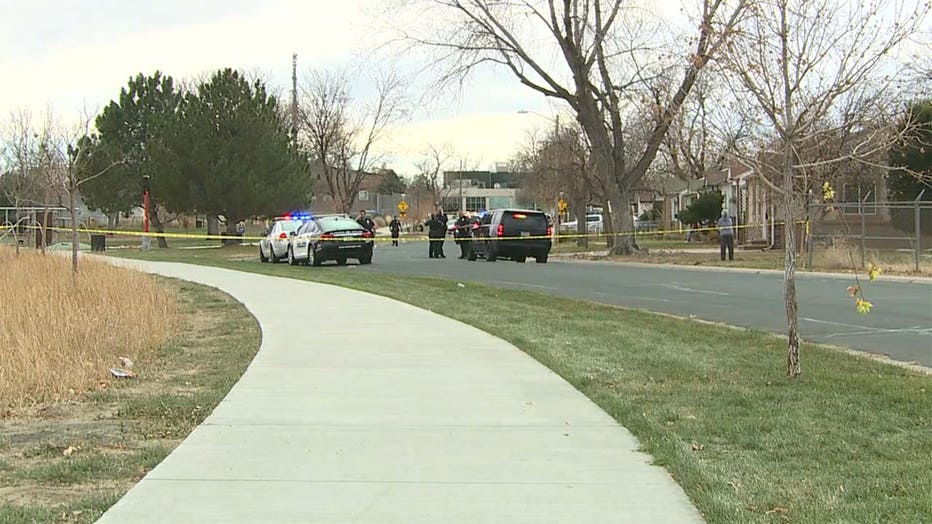 Still image taken from video footage at the scene of a shooting at an Aurora, Colorado park.

The chief commended school resource officers who were able to respond to the scene quickly and provided tourniquets for two of the injured victims.

Wilson said it is believed the shooting was a drive-by and there are possibly multiple suspects at large. No descriptions were given and the chief said multiple types of guns of different calibers were used to perpetrate the shooting.

"I need us all to be outraged about what happened here today," Wilson said during a news conference.

Police are asking for the public’s help with locating people of interest as well as providing any additional information.

Anyone with information is asked to call crime stoppers at 720-913-STOP.

Central High School students were dismissed and parents or guardians will receive an email about the incident later Monday evening, according to police.