Thankfully everyone including pets made it out safely, although the extent of the damage and the cause of the fire are unknown - and the timing of the fire also weighs heavy for those impacted.

Before the flames were out of control, Lasonji Southall went door-to-door inside a 20-unit building at the fairways of Woodfield off I-75 in Grand Blanc.

"Yell, they hear us, let them know 'Fire get out,' leave what you got and grab what you can but get out," she said."I went to the neighbor across the hall and knocked on his door. He answered, I said 'Put your pants on we've got to go. It’s a fire.' He’s like 'Where?' I’m like, 'Right there.'"

She was able to alert five residents in total. In between she says she placed a call to 911.

"My instincts kicked in and like, I forgot about me and my pain and I had to save lives," Southall said.

It was around 3 p.m. Tuesday afternoon - thankfully most people were not home at the time. But that also gave the fire time to spread.

"The fire just traveled the attic space and we stopped it at the south end of the building," said Grand Blanc Fire Chief Robert Burdette.

Soon the flames were seen shooting from the roof.

"I was going to close the patio blinds and look directly out and see smoke and firefighters," said witness Madison Ringlein.

Seven different departments tackled the fire from above with a ladder truck, hoses on the ground, and from within the building - getting control within two hours of the first call.

"We’re going to go in there and find hot spots and put those out," Burdette said.

Thankfully everyone including pets made it out safely, although the extent of the damage and the cause of the fire are unknown - and the timing of the fire also weighs heavy.

"Now when it comes to the residents, before a holiday, it’s a rough fire," Burdette said.

The residents were told they will likely get a chance to go inside on Wednesday to see what can be salvaged. But that really depends on the investigation at this point. 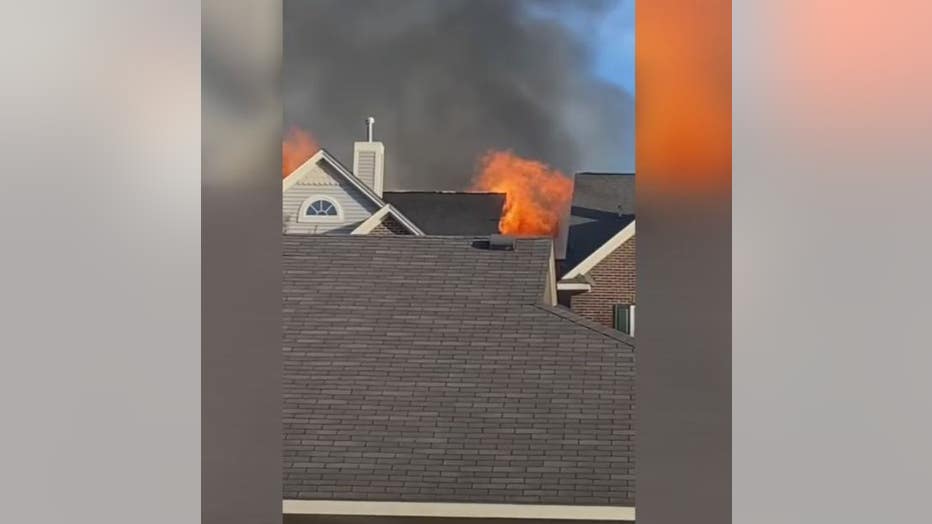 The chief said The Red Cross was there helping residents.

"Our mass transportation system brought out a bus for people to warm up on," he said. "They are going on over to the community room right now to sit down and give their information to The Red Cross."