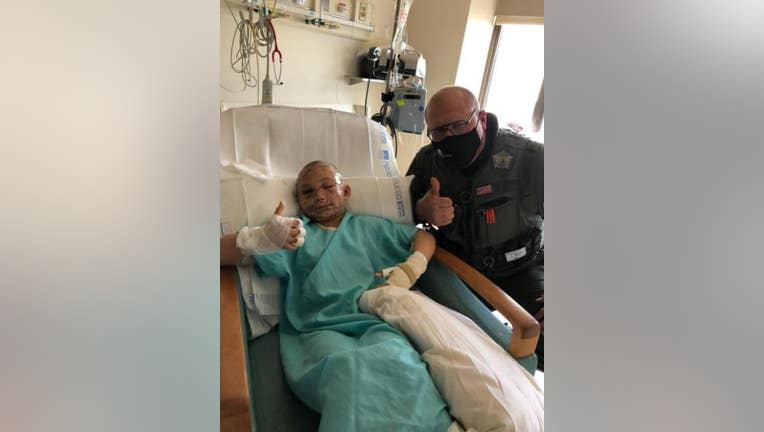 STEVENS COUNTY, Wash. - 9-year-old Lily Kryzhanivskyy is recovering after being attacked by a cougar near Fruitland, Washington in Stevens County on Saturday morning.

According to a statement released by the Washington State Department of Fish and Wildlife (WDFW), Kryzhanivskyy was camping with family when she was attacked.

The girl fought back while her friends ran for their lives. Adults rushed to help and found the girl covered in blood.

Her family says she was calm and collected in that chaotic moment.

"She wasn’t panicking, she wasn’t screaming, she wasn’t yelling. So they helped her get her down to the campsite. They said they sat her down and he was sitting up by herself, very calm and said ‘can somebody please just wash my face?’" said Okasna Mantsevich, Kryzhanivskyy's aunt.

She was then airlifted to a hospital, and fell into a coma overnight.

Her family said she woke up the next day breathing at 100% and is recovering from surgery for multiple wounds to her head and upper body.

"The pain that she’s in and not being able to sleep comfortably—she’s out there singing. I mean, just nothing short of a miracle and just amazing to watch. We’re so super proud of her and how strong she is," said Mantsevich.

Others later found the young male cougar and killed it.

"Our primary thoughts are with the girl and her family," said Staci Lehman, Communication Manager, WDFW Public Affairs.

The WDFW is investigating the incident.

"In this instance, this little girl did nothing wrong," she said. "It happened so quickly, and there’s nothing she could have done to prevent it."

Anyone confronted by a cougar should yell at the animal and try to make yourself look bigger than it is, she said. If it attacks, "fight back as hard as you can and try to stay on your feet."

"Do not turn around. Don’t take your eyes off the animal," Lehman added. "Don’t run."

Additional information about cougar safety and what you should do if you encounter one can be found at Cougar | Washington Department of Fish & Wildlife.  WDFW advises that people hiking and recreating in the backcountry should carry bear spray as a precaution, which is also effective on cougars.

RELATED: Cougar jumps through screen door to get inside eastern Washington home

Wildlife officials warn more wildlife sightings and encounters are likely during spring in Western Washington. But urge residents to be cautious and take steps to keep a distance from wildlife such as bears and cougars.