ANN ARBOR, Mich. - A unique data set out of Lake Michigan is offering a glimpse into the future of seasons in the Great Lakes and the cascading effects that global warming is having on the region's climate. 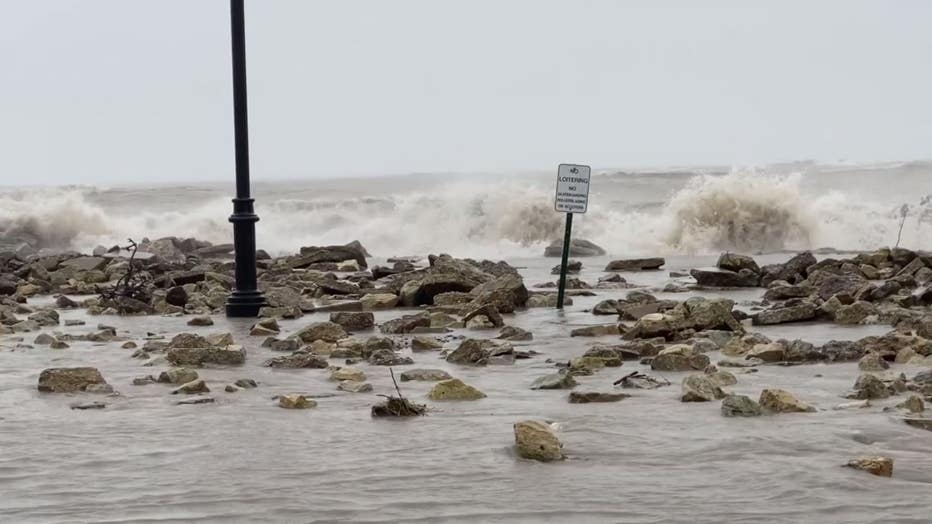 Lake Michigan flooding in January 2020 at the Illinois and Wisconsin border.

Data that measured temperatures in Lake Michigan's subsurface waters over the past 30 years shows that not only are the Great Lakes deeper regions warming over time, but they are as a result of shorter winters and longer summers.

That could drastically impact the region's food web and alter the ecology of marine life that live there, a new study from the NOAA's Great Lakes Environmental Research Laboratory (GLERL) concluded.

Most studies measuring temperature trends in water have only looked at the surface level. Very few have had the opportunity and resources to measure further down.

But in Lake Michigan, the world's 4th largest freshwater lake on Earth, instruments have been tracking temperatures every hour more than a hundred meters below the surface for the last 30 years.

These shifts could have "profound impacts on the ecosystems of the world's surface freshwater," read the study, which was published in the journal Nature Communications.

Scientists studying data from 1990 to 2020 say that subsurface waters in Lake Michigan increased at a rate of .06 degrees Celsius per decade.

Most published studies on warming trends have monitored the air and surface temperatures. Both are intimately connected and when one changes, it affects the other.

But few studies have measured what changes are happening below. Beginning 30 years ago, NOAA deployed equipment 150 meters deep at a location near the southern end of the lake. Since then, the federal agency has used an array of sensors to collect data that GLERL's study analyzed.

They found that the warming air and surface temperatures were also impacting temperatures deeper underwater. While unknown and unseen for years, the subsurface water body changes represent a missing piece for understanding climate change's effects on the larger ecosystem.

The subsurface change in water is the indirect result of warming air temperatures above. But understanding why can be tricky.

Under normal conditions, when summer turns to fall, which then turns to winter, about half of the world's freshwater lakes undergo a transformation where its water columns mix. As air temperatures cool, so does the lake surface, which causes it to mix with the water beneath it. The two layers will mix until they find a minimum resting temperature in the middle of winter

Then, as winter turns to spring and the air temperature warms with it, the surface heats up and a similar but opposite process happens again. This is an important process that helps recycle nutrients throughout the lake and maintain a healthy food web.

However, as the air temperature above has gradually gotten warmer and stuck around for longer, it's disrupting this cycle. It used to start in mid-November. Then it became delayed to December. If that mixing is happening later, then temperatures beneath the surface aren't cooling as much for as long.

"We found that this long-term data set not only confirms that Lake Michigan’s deep waters are warming, but also shows that winter is vanishing from them," Eric Anderson told NOAA in an interview published yesterday.

Snowfall has decreased in the Grea Lakes Basin by more than 2% since 1984. Even under the most optimistic conditions, it's still expected to decline by a quarter. Ice cover over the lakes is also shrinking.

What happens when Michigan's lakes warm?

It also means shifting in the mixing of water columns, which can reduce the dissolved oxygen in the water, which helps sustain entire communities of marine life. The reorganization of food web structures could lead to an increase in invasive species that can better adapt to warmer waters.

Some invasive species like quagga and zebra mussels have already made food scarce for many coldwater fish species in Lake Michigan. A reduction in available oxygen could deplete nutrients even more.

"In all, the consequences of changes in subsurface water temperatures will result in a profound shift in lake ecology," read part of the study.