DETROIT (FOX 2) - Stellantis wants to make the area around its Detroit Assembly Complex the most environmentally friendly neighborhood in the city, the automaker announced Thursday. The 3-year, $1 millionproject seeks to help improve environmental infrastructure around the complex on the city's east side.

A neighborhood education pavilion will be built starting this year at a nearby stormwater park, a greenspace reconfigured to filter rainwater runoff before it flows into sewer systems. Environmental education signage, bike racks, a bat house, beehives, a pollinator garden and a rain garden also are planned.

The automaker announced its million-dollar effort t to improving the environmental infrastructure around its Detroit Assembly complex called Detroit's Greenest Initiative. But Detroit activists say not enough is being done and cite the impacted air quality.

Stellantis, the world's fourth-largest car manufacturer, was created this year with the merger of Fiat Chrysler and PSA Peugeot.

In 2019, Fiat Chrysler began converting two old plants into the assembly complex. The company agreed to a community benefits deal with the city to provide $35 million to support workforce development and training programs, education, neighborhood and housing improvements, and sustainable operations.

The agreement is in addition to the automaker's $1.6 billion investment in the assembly complex. It hired 3,850 people to work at the new auto plant.

More than 75 meetings have been held with neighborhood groups, residents, area businesses and others to get input on what should be done around the complex, according to Stellantis.

"We're listening to our neighbors and working with them to improve the quality of life for people who live and work here," said Ron Stallworth, an external affairs manager for the automaker.

But activists from the Detroit People's Platform believe the automaker's initiative doesn't go far enough and that emissions from the plant are making residents sick.

"This is an asthma neighborhood," said Robert Shobe, activist."I have COPD myself." 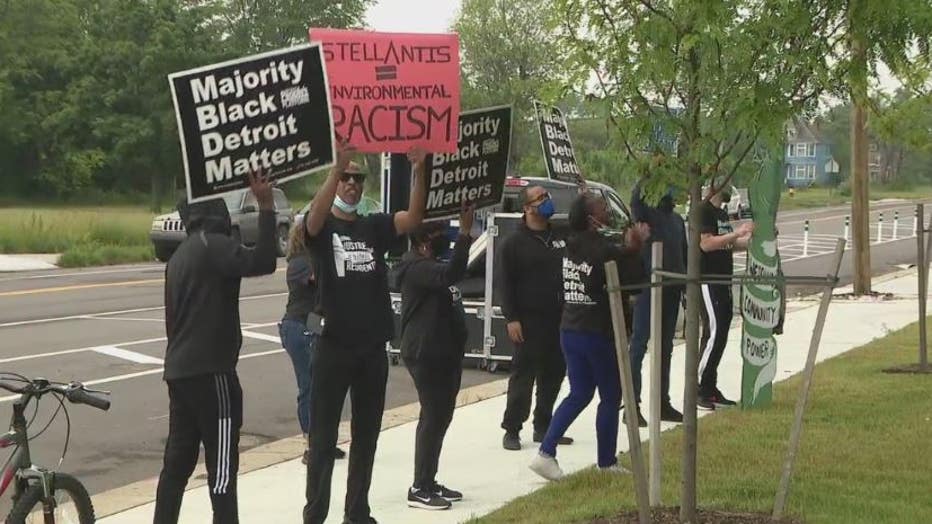 This community activist says the company's green initiative is nothing more than a bandage on a big problem.

"You are about to dump pollutants and different things that you would not put in another area if you had affluent people - people with a few dollars," said Shobe.

"We deeply respect the issues under discussion and we will continue to demonstrate that we are a company that follows through on its commitments."

"We are still not being dealt with fairly," said Shobe. "We haven't been negotiated with fairly. I'm not giving up the fight - I'm here."

About 800 of a planned 1,100 trees also have been donated by Stellantis and planted with the help of the nonprofit group The Greening of Detroit on the automaker's property and within the immediate neighborhood.

Rain barrels and information about the benefits of capturing and reusing rainwater, wildlife and habitat conservation efforts, and restoration of vacant lots are among future projects of Detroit's Greenest Initiative.

– The Associated Press contributed to this report