In 2005, Kristine Daniels and Robert Davis purchased their first house together. Davis, a life-long carpenter was making $22 an hour, the best wages he’d ever earned. After having children of their own, it was time to build credit and lock down their own home.

But that’s when their luck ended. They lost the house in 2008 when the housing market crashed. Davis admits he was among the homeowners who probably shouldn’t have been loaned money.

“They were just giving loans to anybody and maybe they had no business giving us the loan that they gave us,” he said. “Because the realtor said ‘I will get you the money, but you gotta buy this house,’ and we went and looked at it in St. Clair Shores. (It) needed some work, but we were willing to do it.”

Since then, the couple’s lives have been thrown into limbo. Davis struggled to find work as their family grew with grandchildren being born. Sometimes he’d pass out fliers that would lead to odd jobs that could buoy the family and keep them housed, but everything remained in flux.

Maybe the house they rented would be sold to another owner, or the landlord was shady. The trailer they later purchased only cost $1, but it would fall apart whenever it rained. In between each move, they lived with friends or stayed at motels.

“Each and every time that we had a setback and we had to settle into another place, by the skin of our teeth we did. This ain’t the first time things have come down to the wire,” Davis said.

But this time is different. Davis’ wife Daniels was diagnosed with stage 4 liver and pancreatic cancer in June. The trips to the hospital means that Davis doesn’t have time to work, which means the family has fallen behind on rent. They were served an eviction notice the same day Daniels learned of the cancer. After a meeting in court, Davis was told he’d have to have him and his family, now numbering 11, out of the home. They also received a medical bill for more than $140,000 due to the biopsies and check-ins. 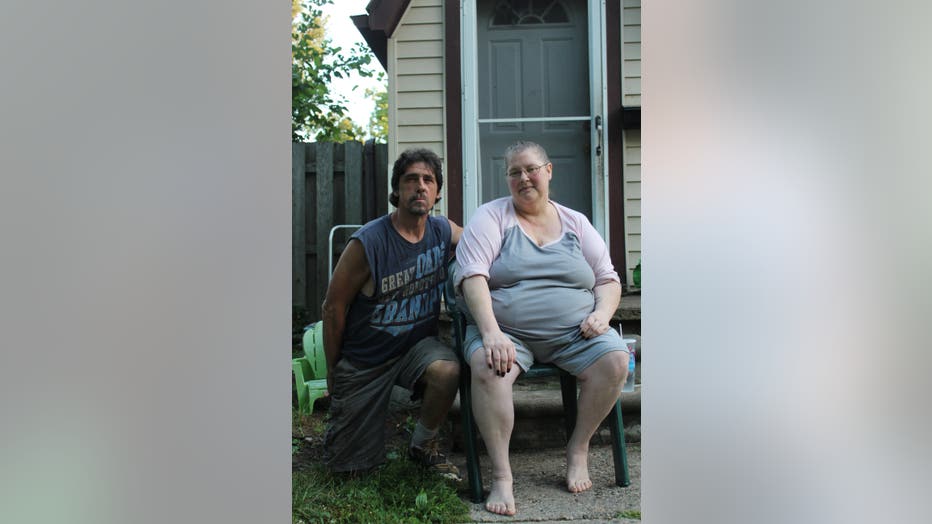 The limbo that Davis and Daniels have lived in for the last decade isn’t just the product of the family not bringing in enough money. It’s also a problem of not finding an affordable and reliable place to live. Housing costs tend to get cheaper as units get older, but the quality of those homes is just as important. When either option isn’t available, it can make living for low-wage earners hard. Then, when a surprise medical bill or car expense shows itself, living can become impossible.

“Look at the family level. We know when people can’t afford safe housing, they have to make budget trade-offs, which can have a negative impact on health,” said Julie Cassidy, a policy expert with the Michigan League for Public Policy (MLPP).

That means one’s chance of earning more later in life is hindered, or the basic necessities like health care, transportation or school are severely limited.

“And so if people are having to take time off work, if they’re sick they can’t afford going to the doctor because rent is so high, or they lose their job taking care of their kid, that will push them further to homelessness,” said Cassidy.

The threat of homelessness isn’t evenly felt across the state, however. When the housing bubble burst, the impact hit differently across the housing landscape. Any sense of a recovery has favored homeowners over renters by a large margin.

“If you dig into people’s ability to afford housing, everything has definitely taken a big hit,” said Dave Allen, the manager of the Office of Market Research at the Michigan State Housing Development Authority (MSHDA). “(But) since renters occupy jobs that don’t pay as well, like service or retail industry, renters have a larger issue.”

To spotlight the disparity between owners and renters, Allen cites the difference in those who are cost-burdened or paying more than 30 percent of their income on housing. More than half of the area’s renters are cost-burdened, but less than a quarter of homeowners feel the same pinch.

As that number of burdened renters remains high, low-income earners have been left to fend for an increasingly small number of affordable housing, a problem that’s magnified by the skyrocketing cost of building a home and the dwindling investment in subsidized housing. We’ll examine the former first.

When a house or unit becomes affordable, it’s because of a multitude of reasons. But typically, when experts think about why a unit becomes cheap, they like to use two reasons:

The housing department likes to call this process naturally occurring affordable housing, or NOAH. The trends of NOAH units had fluctuated over the decades until 2010 when their numbers plummeted across the state. The numbers are even more dire in Detroit. In April, the Harvard Joint Center for Housing Studies released a report showing the number of low rent units, those worth under $800 a month, in the Detroit metro area fell by almost 15 percent from 2011 to 2017.

Just as housing costs can decline with age and desire, it can also rise with demand, which is what’s happening in Detroit, partly due to its aging population. But it’s also due to the cost of building a home - which as it stands right now is too much.

“The market is softening simply because most builders will tell you today, they can’t make money on a house for less than $300,000,” said Bob Filka, CEO of the Home Builders Association of Michigan. “If you look at the math in terms of land development, regulatory, escalating building materials and now labor costs, you understand why that’s the case.” 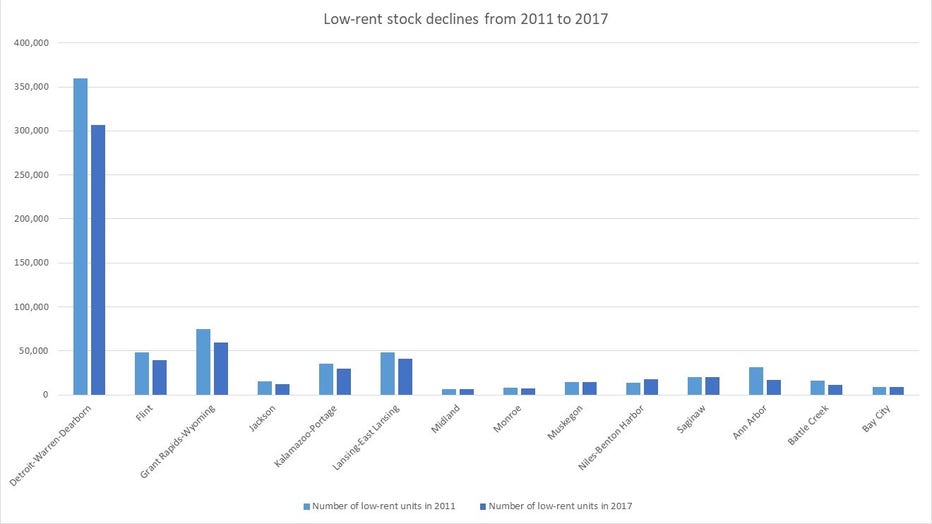 (Courtesy of the Harvard Joint Center for Housing Studies)

The available labor pool has also declined. When the recession hit and construction workers found themselves without work, they left the state in search of better job opportunities. As those numbers haven’t been replaced, Filka said there has also been a decrease in immigrant workers too afraid to go back to work due to the political climate.

“The bad news is we’re not building enough supply, on average,” Filka said. “Over the last 60-70 years, (Michigan) built on average 26,000 homes a year. Most economists will tell you for a state that size, with an aging housing stock and demographic changes in the state, you need at least that number of homes built to keep up with demand. For more than a decade, we’ve been below that norm.” 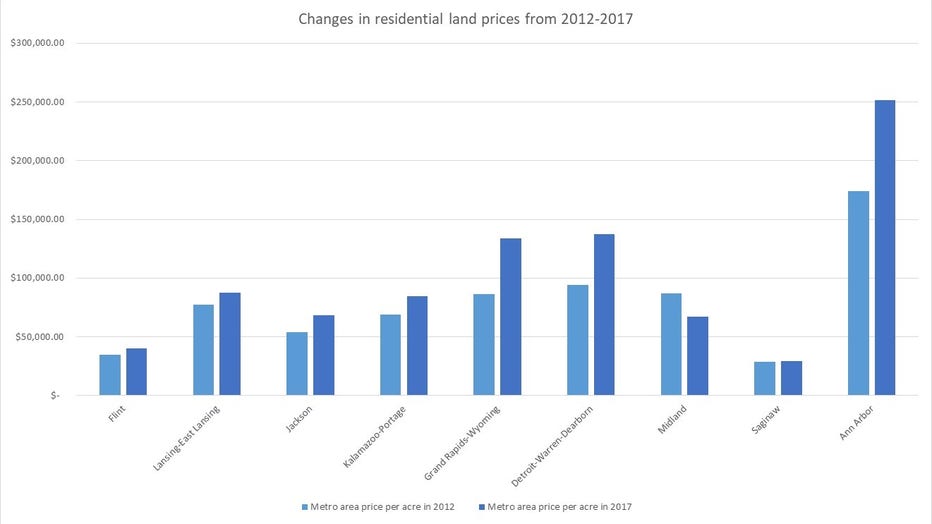 (Courtesy of the Harvard Joint Center for Housing Studies​​​​​)

Instead of building new homes worth $400,000, middle-class families have started purchasing older homes worth $150,000-$200,000 and refurbishing them. Filka said that change has led to a $1 billion increase in remodeling activity. But it has also sucked up much of the cheaper units that would otherwise be rented by low-income workers.

Cheap units with a monthly rent of $800 are no longer available to someone who makes little money because middle-class families that can't afford to build a new home choose instead to purchase the cheaper ones.

"This is part of the reason why offering tax credits and subsidizing the cost of affordable housing won’t fix this problem," Filka said. "It's a ripple effect that's compounding the problem. Even if you're building rental units or multi-family units, you're pushing people with families out.“

Offering tax credits and subsidies is one way to ease the burden on housing. However, investment has been lacking, which brings us to the second problem.

There’s plenty of ways to fund affordable housing, almost all coming from the Department of Housing and Urban Development (HUD). Low-wage earners can take advantage of Section 8 housing, which offers different programs and vouchers to pay for part of their rent. Cities can draw on community block grants that will revitalize communities by keeping housing affordable or draw down funds from the HOME Partnership program, also offered by HUD.

Unfortunately, cities have seen a steep decline in this funding for housing in recent years. According to the city in 2002, Detroit received over $75 million in funding for building affordable housing. In 2016, that number fell by almost half, slipping to only $41 million. As a result, this has led to a stark decline in the number of affordable projects being built.

“Those subsidies are very valuable,” said Luke Forrest, executive director of the Community Economic Development Association (CEDAM). “(Our) supply and demand problem is constrained by the allocation of federal and state dollars. They don’t have enough money and so those programs are underfunded.”

One of the biggest sources of money comes from the Low Income Housing Tax Credit (LIHTC), which subsidizes the cost of housing for developers for 15 years, with the option for them to offer affordable housing for 15 more years afterward. Like most other forms of funding, the supply has not kept up with demand. On April 1, 2019, potential developers requested more than $50 million in funding from this credit program. MSHDA could only award $13.8 million.

As a result, the pace of LIHTC-funded units in Detroit has declined dramatically. Doubling the problem is the number of those projects reaching their 15-year threshold to remain affordable. Once that time runs out, landlords will get to decide whether to convert their units to market rent or keep them affordable.

“An investor isn’t going to pony up money to keep it (housing units) affordable even with funding,” said Ruth Johnson, public policy director of the Community Development Advocates of Detroit (CDAD). “I’m not against people making money. The problem is current funding sources. The incentives are not adequate to meet the demand for more affordable housing. We’re losing it as demand is increasing.”

There presents the crux of the problem. The gap between the supply of affordable housing and the demand for affordable housing is going to continue to widen. As housing market forces continue pushing downward, it increases the pressure on an already burdened tax base. Forrest said the longer that hole isn’t filled, the worse it will get.