Senior Pentagon officials testified Wednesday that the collapse of the Afghan government and its security forces in last month can be attributed to a 2020 agreement with the Taliban that promised a complete U.S. troop withdrawal.

WASHINGTON (AP) - Senior Pentagon officials said Wednesday the collapse of the Afghan government and its security forces in August could be traced to a 2020 U.S. agreement with the Taliban that promised a complete U.S. troop withdrawal.

Gen. Frank McKenzie, the head of Central Command, told the House Armed Services Committee that once the U.S. troop presence was pushed below 2,500 as part of President Joe Biden's decision in April to complete a total withdrawal by September, the unraveling of the U.S.-backed Afghan government accelerated.

"The signing of the Doha agreement had a really pernicious effect on the government of Afghanistan and on its military — psychological more than anything else, but we set a date-certain for when we were going to leave and when they could expect all assistance to end," McKenzie said.

He was referring to a Feb. 29, 2020, agreement that the Trump administration signed with the Taliban in Doha, Qatar, in which the U.S. promised to fully withdraw its troops by May 2021 and the Taliban committed to several conditions, including stopping attacks on American and coalition forces. The stated objective was to promote a peace negotiation between the Taliban and the Afghan government, but that diplomatic effort never gained traction before Biden took office in January.

McKenzie said he also had believed "for quite a while" that if the United States reduced the number of its military advisers in Afghanistan below 2,500, the Kabul government inevitably would collapse "and that the military would follow." He said in addition to the morale-depleting effects of the Doha agreement, the troop reduction ordered by Biden in April was "the other nail in the coffin" for the 20-year war effort because it blinded the U.S. military to conditions inside the Afghan army, "because our advisers were no longer down there with those units."

Defense Secretary Lloyd Austin, testifying alongside McKenzie, said he agreed with McKenzie's analysis. He added that the Doha agreement also committed the United States to ending airstrikes against the Taliban, "so the Taliban got stronger, they increased their offensive operations against the Afghan security forces, and the Afghans were losing a lot of people on a weekly basis."

Wednesday's hearing was politically charged, with Republicans seeking to cast Biden as wrongheaded on Afghanistan, and Democrats pointing to what they called ill-advised decisions during the Trump years. 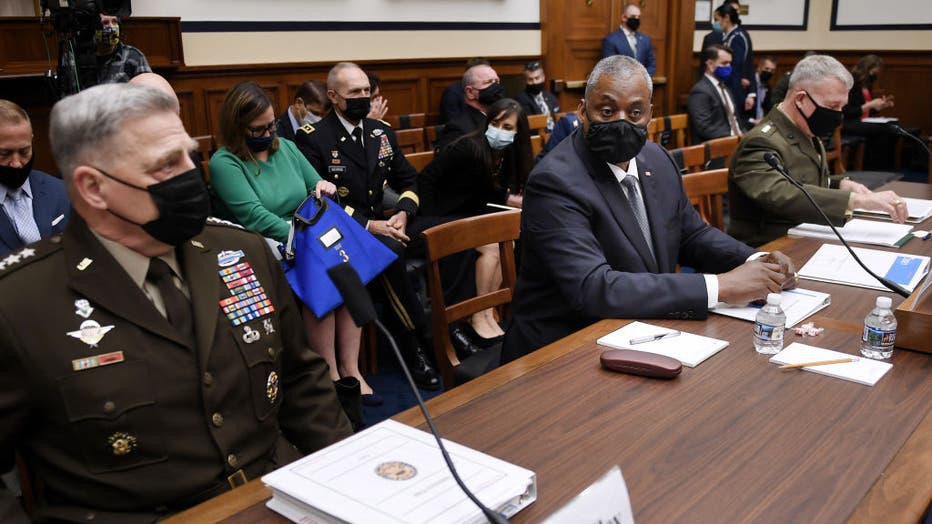 Gen. Mark Milley, chairman of the Joint Chiefs of Staff, had said a day earlier in a similar hearing in the Senate that the war in Afghanistan was a "strategic failure," and he repeated that on Wednesday.

Milley told the Senate committee, when pressed Tuesday, that it had been his personal opinion that at least 2,500 U.S. troops were needed to guard against a collapse of the Kabul government and a return to Taliban rule.

Defying U.S. intelligence assessments, the Afghan government and its U.S.-trained army collapsed in mid-August, allowing the Taliban, which had ruled the country from 1996 to 2001, to capture Kabul with what Milley described as a couple of hundred men on motorcycles, without a shot being fired. That triggered a frantic U.S. effort to evacuate American civilians, Afghan allies and others from Kabul airport.

This week's House and Senate hearings marked the start of what is likely to be an extended congressional review of the U.S. failures in Afghanistan, after years of limited congressional oversight of the war and the hundreds of billions of taxpayer dollars it consumed.

RELATED: Gen. Mark Milley: Calls to China were 'perfectly' within scope of job

Tuesday's hearing also was contentious at times, as Republicans sought to portray Biden as having ignored advice from military officers and mischaracterized the military options he was presented last spring and summer.

In a blunt assessment of a war that cost 2,461 American lives, Milley said the result was years in the making.

"Outcomes in a war like this, an outcome that is a strategic failure — the enemy is in charge in Kabul, there's no way else to describe that — that is a cumulative effect of 20 years," he said Tuesday, adding that lessons need to be learned, including whether the U.S. military made the Afghans overly dependent on American technology in a mistaken effort to make the Afghan army look like the American army.

Republican Sen. Tom Cotton of Arkansas asked Milley why he did not choose to resign after his advice was rejected.

Milley, who was appointed to his position as chairman of the Joint Chiefs of Staff by President Donald Trump and retained by Biden, said it was his responsibility to provide the commander in chief with his best advice.

"The president doesn't have to agree with that advice," Milley said. "He doesn't have to make those decisions just because we are generals. And it would be an incredible act of political defiance for a commissioned officer to resign just because my advice was not taken."

Milley cited "a very real possibility" that al-Qaida or the Islamic State group's Afghanistan affiliate could reconstitute in Afghanistan under Taliban rule and present a terrorist threat to the United States in the next 12 to 36 months.