Michigan authorities have been inundated with tips into the OK2SAY tip line since the Oxford High School Shooting.

PLYMOUTH, Mich. (FOX 2) - In the wake of the Oxford High School shooting, Michigan's OK2SAY tip line - a way for student to report issues like suicide threats, drugs, other (depression, stress, anxiety), cyberbullying, and sexual misconduct - has seen more tips in ten days than almost all of last year.

On Thursday, police surrounded Canton-Plymouth Educational Park after a tip came in of someone with a gun. Police are responding to all of these threats to keep our students safe, and more tips than ever are coming in.

"It was over the speakerphone, there was (a teacher). She sounded really nervous about it. She said this is a lockdown. This is not a drill," Sandhu said. "One of my friend's said some kid in her class got handcuffed out, and they searched him and everything."

The report of a student with a gun sent all three schools - Plymouth, Canton, and Salem High Schools - into lockdown, keeping more than 6,000 students inside their classrooms.

Police didn't find any evidence of a weapon but say it's the type of threat that students and teachers alike are being asked to report.

"The community leaders have asked the community members to reach out to OK2SAY if they have any threats or concerns - anything they feel authorities should know," said Detective Sgt Carlos Fossati.

"Every little bit of information we receive from the public all goes into a larger puzzle," Fossati said.

He said every bit of information is crucial in a possible threat or investigation and says, no matter how many times we see or hear about threats, it's important to educate the public on trusting their instincts.

OK2SAY has four technicians plus team leaders working nonstop to check on each tip. 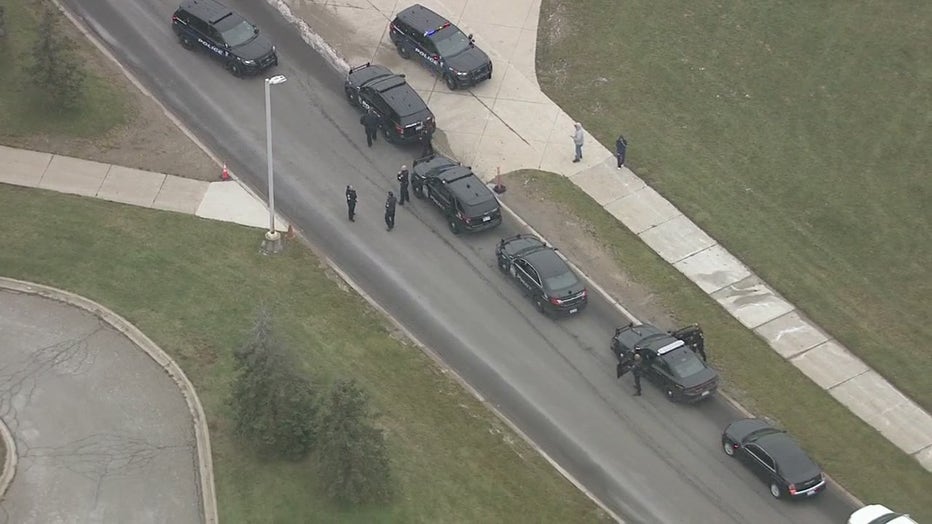 Police from multiple agencies investigate after a threat was made at Plymouth-Canton High School on Thursday, Dec. 9.