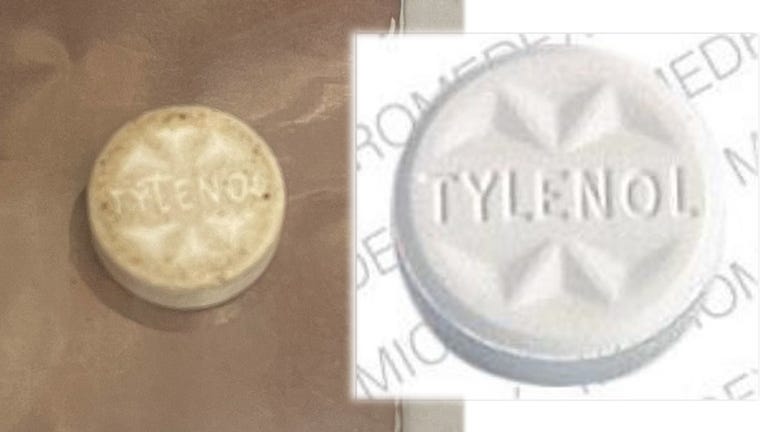 LORAIN, Ohio - Authorities in Ohio warned the public about recently seized pills made of fentanyl and cocaine but disguised to look like Tylenol or other over-the-counter medication.

Police in Lorain, a city located about 30 minutes west of Cleveland, shared a photo on Tuesday of a seized pill pressed with what appears to look like the word "Tylenol" but was determined to be fentanyl.

"We would like to advise the public to always be cautious when handling medication, even if it appears to be over-the-counter medication," the Lorain Police Department wrote on Facebook.

The police department said other pills seized were disguised to look like Metoprolol — a non-controlled blood-pressure medication — but were later determined to be cocaine.

Lorain police told local news station FOX 8 that the drugs were discovered during two narcotics investigations over the past couple of months, and investigators are now trying to determine how widespread the problem may be in the area.

"The concerning thing is that everything about these pills did, in fact, look to be genuine and certainly at first glance, especially if you were to encounter them within a pill bottle that was marked with the blood pressure medication or as Tylenol," Lt. Jacob Morris with the Lorain Police Department told the news station.

"Clearly, in that this has been seized in the process of two different investigations and with two different substances, two different narcotics, this may be a trend that is somewhat regular or somewhat being used right now to traffic drugs," Morris said.

Rain Augustine speaks with Dr. Morrone on the opioid crisis

Fentanyl is a synthetic opioid that can be up to 100 times stronger than morphine, according to the U.S. Centers for Disease Control and Prevention and the U.S. Drug Enforcement Administration.

Pharmaceutical fentanyl was developed for pain management treatment of cancer patients, applied in a patch on the skin. But because of its powerful opioid properties, it has helped drive the nation’s drug overdose epidemic.

Roughly 130 miles west of Lorain, at least seven people at an Ohio juvenile detention facility were hospitalized after fentanyl was discovered in the facility’s air ventilation system, forcing an evacuation.