Major backups at the border between the U.S. and Canada are creating havoc on trade and commerce between the two countries after another round of closures on the Ambassador Bridge resulted in truck drivers heading to other crossings. Mile-long traffic jams in Port Huron and the entrance to the Blue Water Bridge are occurring as a result.

DETROIT - Cameras over the highway on I-94 depicted a massive traffic jam building up near Port Huron, where the only bridge port of entry linking Canada to the U.S. that remained open became overwhelmed with diverted truck traffic.

As the shutdown of the Ambassador Bridge stretches into its third day, border officials are trying to shuffle two avenues of heavy traffic into one route.

It's creating images like the one over I-94 at Water Street in Michigan's thumb, which shows a miles-long stretch of semi-trucks looking to cross into Canada. 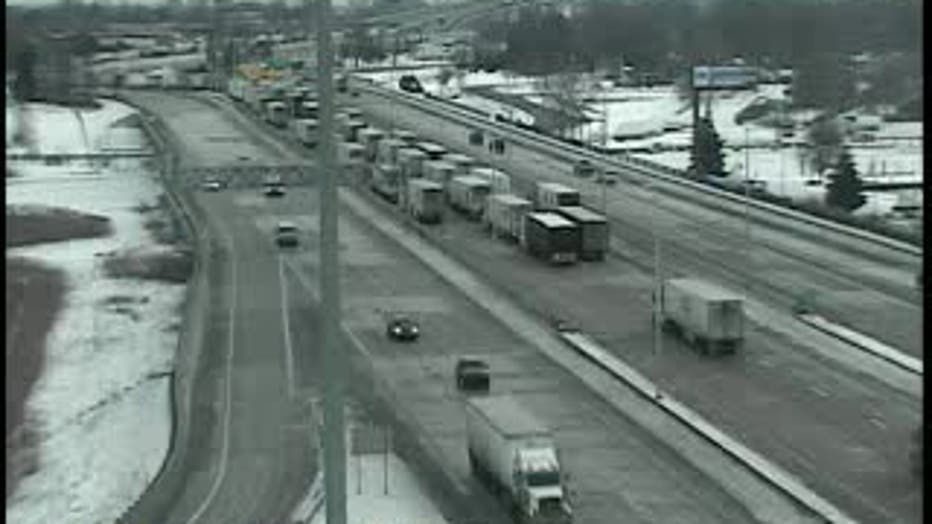 The scene at I-94 and Water Street outside Port Huron. Photo via MDOT cameras.

"Basically, Canada only has two entrances here to the United States - Detroit and Port Huron here, and it’s heavy heavy traffic," said Terry Mullin. In the driver's 40 years on the job, he says he's never seen anything quite like it.

"There’s so many trucks that are waiting to deliver their freight," he said. "And freight is so important to everybody, to get to the businesses to receive stuff that you’re going to go shop at, so it’s got to move."

The shutdown is linked to a protest by the Canadian Freedom Convoy, a collection of truckers upset with the country's vaccine mandate and other COVID-19 restrictions. The weekslong protest that planted itself in Windsor has spilled into an international incident that could be costing companies hundreds of millions of dollars in supply chain costs.

At least one province in Canada says it intended to drop its vaccine mandate.

Access to the Ambassador Bridge remains open for those on the Canadian side of the bridge, where traffic is still flowing.