Police handling the Gabby Petito and Brian Laundrie case are addressing rumors that DNA testing on Laundrie's remains were not a match to him. In a statement released on Twitter, the North Port police included a statement from the medical examiner who did the autopsy on Laundrie that stated no DNA analysis had yet been performed on the remains but that the remains were confirmed to be Laundrie through dental records.

Amid the search for Gabby Petito and Brian Laundrie, law enforcement agencies across the country discovered six additional bodies.

A nationwide search commenced following the disappearance of Petito and her fiance, Laundrie, and law enforcement across the country believe the attention Petito’s case received helped with finding the remains of at least six additional missing individuals.

Petito, 22, and Laundrie, 23, were on a cross-country road trip in a converted camper van when she suddenly disappeared.

Petito had last been in contact with her family in late August when she and Laundrie were visiting Grand Teton National Park in Wyoming. Their social media posts documenting the trip stopped abruptly and Laundrie returned to their Florida home in the van — alone, according to investigators.

It was later found that Laundrie's family had not seen him since Sept. 14 and a nationwide search ensued. 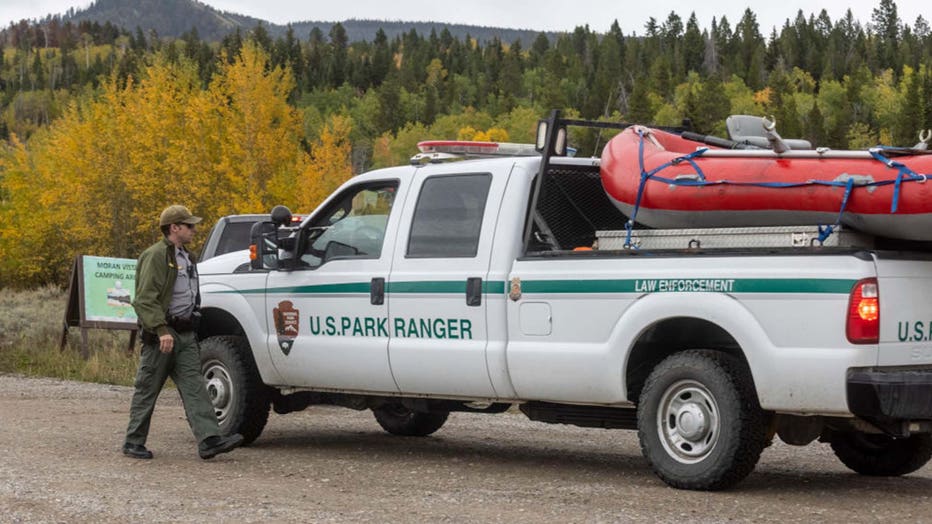 FILE - A park ranger speaks with a colleague on the road to Spread Creek Campground on Sept. 19, 2021 near Moran, Wyoming. (Natalie Behring/Getty Images)

On Sept. 19, the remains of Petito were found at Bridger-Teton National Forest, north of Jackson Hole, Wyoming and the search for her fiance ramped up with tips being called in about alleged sightings of Laundrie across the country. Petito’s death was ruled as a homicide and her cause of death was by strangulation, according to the autopsy report.

On Oct. 21, the FBI confirmed that human remains found at a Florida park were that of Brian Laundrie, the only person of interest in Petito’s case.

The FBI Denver field office confirmed that dental records were used to match what North Port police referred to as "bones" found at the Myakkahatchee Creek Environmental Park in North Port.

Amid the search for Laundrie, at least six additional bodies were found of missing individuals across the country.

Earlier sightings in September had Laundrie in Mobile, Alabama, according to local news media. Investigators were chasing down dozens of tips from people who believed they saw Laundrie or someone who looked a lot like him in the area, according to FOX10 News.

To add fuel to the fire, a body was found in a dumpster next to a Walmart in Tillman's Corner, a suburb of Mobile. Many speculated that the body was Laundrie's, but police later revealed the body was identified as a homeless man, according to FOX10 News.

In August, newlywed couple Kylen Schulte, 24, and Crystal Turner, 38, were found shot to death near Moab in the South Mesa area of the La Sal Mountains.

While the discovery of Schulte and Turner’s bodies happened before Petito’s body was discovered, it was speculated that the incidents were connected.

However, investigators later revealed neither case was connected and the search for Petito and Laundrie resumed.

"It has been determined that the Gabby Petito missing person case is not related to the double-homicide case involving Crystal Turner and Kylen Schulte," Grand County Sheriff Steven White said in a statement on Sept. 18.

RELATED: Gabby Petito update: Everything known about her death, search for Brian Laundrie

On Sept. 28, teams with Teton Search and Rescue discovered a body at the base of Teton Pass in Wyoming.

In the frantic search for Petito following her suspicious disappearance on Aug. 27, rescuers were able to find the body of Robert "Bob" Lowery, 46, of Houston, Texas.

Lowery died by suicide from a gunshot wound to the head, according to the Teton County coroner.

"The widespread news coverage of the Gabby Petito search helped bring light to Lowery’s case, and resulted in at least two members of the public calling local authorities this past weekend with new information about his possible last seen point," officials said following the discovery of Lowrey’s body.

The body of another missing Texas man was recovered on Oct. 24 in Grand Teton National Park—the same park where the body of Petito was located last month.

Following the nationwide search for Petito, interest reignited for a case out of California where 30-year-old Lauren Cho disappeared in the Yucca Valley area two months ago.

Cho was last seen on June 28 when she walked away from a rental property in the 8600 block of Brenmar Trail, according to the San Bernadino County Sheriff’s Department.

On Oct. 9, human remains were located in the rugged terrain of the open desert and were positively identified as Cho, according to the San Bernardino County Sheriff’s Department.

In early October, several reports started emerging of witnesses who believed they saw Laundrie on the Appalachian Trail near the North Carolina and Tennessee border.

Dennis Davis, who spoke to a number of news outlets on Oct. 2, including Fox News Digital twice, said it didn't at first register that the driver may have been Laundrie, but after the encounter, he looked up photos of the fugitive wanted on debit card fraud charges, and he then felt convinced enough to call in the sighting to the FBI twice, as well as 911 operators in Tennessee and North Carolina.

RELATED: Brian Laundrie lookalike has hotel door kicked in by US Marshals, deputies in arrest attempt

"There is no doubt about it. That was Brian Laundrie I was just talking to. 100%. Not a doubt in my mind," Davis said of the encounter after he looked up both a portrait and profile shot of Laundrie on his phone.

Meanwhile, on Oct. 9, National Park Service rangers located a body on the Blue Ridge Parkway, according to local news media. The body was identified as 33-year-old Joshua Calderon and his death is being investigated as a homicide.