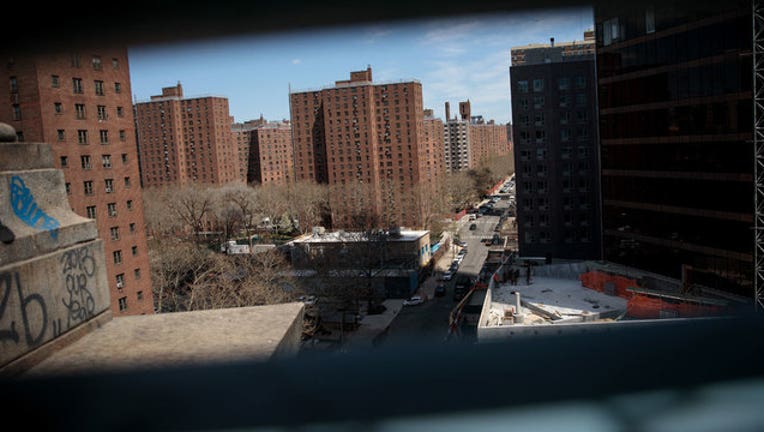 The Henry Rutgers Houses, a public housing development built and maintained by the New York City Housing Authority (NYCHA), stand in in the Lower East Side of Manhattan, April 26, 2018 in New York City. (Photo by Drew Angerer/Getty Images)

CHARLESTON, S.C. (AP) - Housing Secretary Ben Carson says his latest proposal to raise rents would mean a path toward self-sufficiency for millions of low-income households across the United States by pushing more people to find work. For Ebony Morris and her four small children, it could mean homelessness.

Morris lives in Charleston, South Carolina, where most households receiving federal housing assistance would see rents rise an average 26 percent, according to an analysis done by Center on Budget and Policy Priorities for The Associated Press. Her increase would be nearly double that.

Overall, the analysis shows that in the 100 largest U.S. metropolitan areas, low-income tenants - many of whom have jobs - would have to pay roughly 20 percent more each year for rent under the plan. That's about six times greater than the growth in average hourly earnings, putting poor workers at an increased risk of homelessness because wages haven't kept pace with housing expenses.

"I saw public housing as an option to get on my feet, to pay 30 percent of my income and get myself out of debt and eventually become a homeowner," said Morris, whose rent would jump from $403 to $600. "But this would put us in a homeless state."

The proposal, which needs congressional approval, is the latest attempt by the Trump administration to scale back the social safety net, under the belief that being less generous will prompt those receiving federal assistance to enter the workforce. "It's our attempt to give poor people a way out of poverty," Carson said in a recent interview with Fox News.

The analysis shows families would be disproportionately impacted. Of the 8.3 million people affected, more than 3 million are children.

Morris, a pediatric assistant, said she sometimes works 50 hours a week just to get by. Her four young children would be hit hard if her rent increases, she said.

"Food, electricity bills, school uniforms," she said. "Internet for homework assignments and report cards. All of their reading modules at school require the internet, without it they'll be behind their classmates. The kids are in extracurriculars, those would be scrapped. I would struggle just to pay my bills."

The impact of the plan would be felt everywhere.

Rent for the poorest tenants in Baltimore, where Carson was a neurosurgeon at Johns Hopkins Hospital, and where his own story of overcoming poverty inspired generations of children, could go up by 19 percent or $800 a year. In Detroit, where Carson's mother, a single parent, raised him by working two jobs, rents could increase by $710, or 21 percent. Households in Washington, D.C., one of the richest regions in the country, would see the largest increases: $980 per year on average, a 20 percent hike.

"This proposal to raise rents on low-income people doesn't magically create well-paying jobs needed to lift people out of poverty," said Diane Yentel, CEO of the National Low Income Housing Coalition. "Instead it just makes it harder for struggling families to get ahead by potentially cutting them off from the very stability that makes it possible for them to find and keep jobs."

Carson's "Make Affordable Housing Work Act," announced April 25, would allow housing authorities to impose work requirements, would increase the percentage of income that tenants are required to pay from 30 percent to 35 percent, and would raise the minimum rent from $50 to $150. It would eliminate deductions, for medical care and child care, and for each child in a home: Currently, families can deduct $480 per child, significantly lowering rent.

Donald Cameron, president and CEO of the Charleston Housing Authority, calls the proposal catastrophic. "We'd lose a lot of people within a very short time: the ones with the smallest pocket books, the least discretionary income," he said.

Not all recipients of housing assistance think the plan is unfair.

"I'm in favor of it," said Shalonda Skinner, 29, who lives in public housing with her five children. "Housing helps a lot of people. It will probably put a good amount of people out because some people don't like to work, they're not independent. But it's fair."

If her rent were to go up, she said, "I'd work more," taking on more hair clients.

Melissa Maddox Evans, general counsel for the Charleston Housing Authority, said she believes the proposal is based on a faulty premise - that most public housing residents don't have jobs and that rent increases will incentivize work.

"Most tenants here work two or three job," she said. "When they are going out and finding work, are they going to make enough to accommodate that increase?"

The policy center conducted its analysis based on 2016 HUD data. It includes tenants living in public housing and receiving Section 8 and project-based vouchers. It excludes housing authorities participating in the Moving to Work program, which allows districts to determine their own distinct rent policies.