DETROIT (FOX 2) - It was during a Fox 2 segment coincidentally that Ricardo Holley got a new job.

A Navy veteran who returned to Detroit after serving four years, Holley saw a clip during one the TV station's broadcasts that gave him an idea for a job. That job is making footwear and accessories from leather.

Pingree Detroit hires veterans and Detroiters to do the work. And in turn, they get a paycheck and profit-sharing. And there's a story behind the leather on the goods as well.

"You gotta remember the sacrifice that so many people made for their country. It's a big sacrifice when you sign up to do something like that so just being a part of Pingree that's going to give back to those people that did is amazing," said Holley.

That company, Pingree, has been crafting shoes and boots since 2015. Their profit model is a little unique, however. It hires veterans and Detroiters to do their work, and in return, their employees get a paycheck and some profit-sharing.

But that's only half the story. Each product purchased comes with a story about the veteran who helped craft the product.

"Every product you get at Pingree comes with the name and the story of the veteran Detroiter who made it," said Jarret Schlaf, cofounder of the company. "It's made in Detroit, by hand and our leather is reclaimed from the production of car seats. So brand new car seat leather, we take it and we turn it into wallets, we turn it into the keychains."

If you're eyeing a gift for a loved one or friend, you could pick a worse time to buy one Pingree's products. That's because, during the month of November, 11 percent of the proceeds go to causes that help veterans.

Accompanying some of the more standard items you'd find at a leather shop is a money clip, a highly-sought-after product from Pingree.

"Your audience and folks have been asking for this since we came up with it. So it's finally going to be alive (and) available for preorder on Veterans Day on November 11 and then we've got our new crossbody purse which comes it comes with a choice of a strap," said Schlaff.

And in the spirit of Christmas and the holidays, there's no better time to give a little to get a little back. Keep in mind though, what you're giving extends far beyond the value of the dollar sign in front of that shoe or boot or satchel. 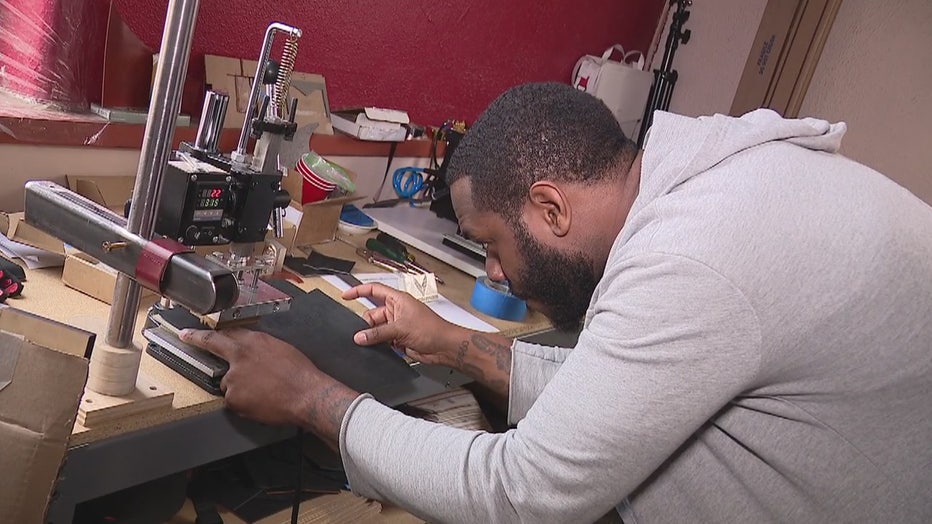 "I mean, it means everything. Me being a veteran, being able to help people like me that have served our country to carry over to the next phase of their civilian life,  it means everything to me," Holley said. "Both being co-owned by veterans and Detroiters and being part of creating resiliency for our neighborhoods - we see it as a win-win," said Holley.