During an impassioned speech on the Senate floor Tuesday, Murphy said hearts in his state where 26 school children and educators were killed a decade ago are breaking for the families in Texas.

WASHINGTON - Rep. Ruben Gallego (D-Ariz.) did not mince words Tuesday, tweeting a profane message to Texas Sen. Ted Cruz following the mass shooting that occurred at a Texas elementary school, killing 14 children and a teacher, and injuring others.

"F*** you @tedcruz you care about a fetus but you will let our children get slaughtered. Just get your a** to Cancun. You are useless," the congressman from Phoenix wrote, without censoring his words.

Gallego responded to comments Cruz made moments after Tuesdays shooting in which he said he doesn’t see gun reform as a solution the problem of mass shootings in the country. 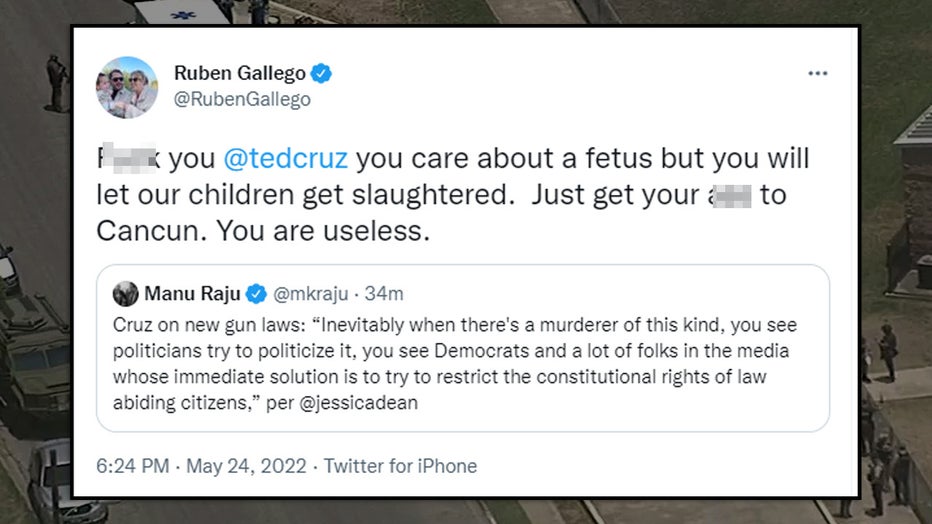 "Inevitably when there's a murderer of this kind, you see politicians try to politicize it, you see Democrats and a lot of folks in the media whose immediate solution is to try to restrict the constitutional rights of law-abiding citizens," Cruz told reporters in Congress after the shooting, according to CNN.

Meanwhile, Cruz posted a reaction to the shooting on social media writing that he and his wife, Heidi, are "lifting up in prayer the children and families" affected. He also thanked first responders for acting so swiftly."

Sinema tweeted that she was "horrified and heartbroken" and shared appreciation for the first responders. "No families should ever have to fear violence in their children's schools," she added.

"Please just stop..," Gallego responded, "unless you are willing to break the filibuster to actually pass sensible gun control measures you might as well just say "thoughts and prayers."

The shooting in Texas came less than two weeks after a gunman opened fire at a supermarket in Buffalo, New York, killing 10 Black shoppers and workers in what officials have described as a hate crime. Across the country that same weekend, someone opened fire in a California church, critically injuring four people and killing one.

It was the deadliest shooting at a U.S. grade school since the shocking attack at Sandy Hook Elementary in Newtown, Connecticut, almost a decade ago.

Lawmakers and activists, and others around the country immediately spoke out about the latest scene of violence. The White House proclaimed flags would be flown at half-staff to honor the victims.

"(The suspect) shot and killed, horrifically, incomprehensibly, 14 students and killed a teacher," Abbott said in a press conference.

READ MORE: Who is Salvador Romas? What we know about Texas elementary school shooting suspect

Editor’s note: Profanity in this story has been censored. Megan Ziegler contributed to this report. It was reported from Los Angeles.